When Grace at the Bliss Café Calls by Jane Vandenburgh

When Grace at the Bliss Café Calls

It’s a terrible day in Baltimore,
and in Kathmandu, and in the port

city of Salerno gloom pervades, and
your own private sorrow’s throbbing

in the exact center of your right
hand, a pain that radiates outward

from palm to fingers that cannot find
the shape of your mechanical pencil,

a Mont Blanc in the burgundy they
don’t make anymore, a gift given

long ago, engraved, and obviously
too good for you since now you’ve lost

it, and this lack fixes you in a place
of grief age-old and physical, an

lists, words invented for some self-
administered spelling test, your then

being told this was an odd, wrong,
cold thing to do. America, you’d

write, if you had your pencil, will you
now turn out to be only a beautiful

idea? You dreaming the weight of
a loss that feels as incalculable as

being orphaned at nine or seeing
another neighborhood gutted or

our communal need to witness the
next 300 lost at sea. Your name

almost exactly his, the etching now
faint along its barrel, and how you’ve

given pens and pencils to your own
kids extravagantly, each birthday, every

Christmas, then found them still in
boxes stuffed in a sock drawer after

they’d returned to school. It was the
classroom that saved you, the clean

notebook, the word September, and
all that white around the black block

of text where you could write what
you really thought, which was that

the dead could talk to you, like when
you stayed in bed all day drawing

riven land, and it’s exactly here, typing
the word riven, then wondering if

you know what it really means, that the
phone rings, the read-out saying Bliss

and it’s Grace, your server at the
vegetarian café by the creek 200 miles

away where you ate three days ago,
saying she needs your address so she

can mail your pencil back to you. 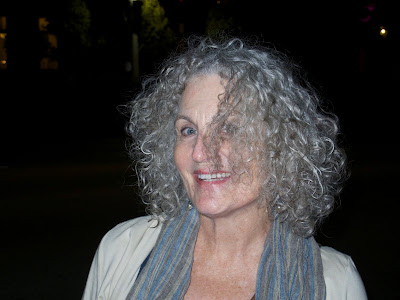 Posted by Anonymous at 7:48 AM