The Star-Apple Kingdom by Derek Walcott

There were still shards of an ancient pastoral
in those shires of the island where the cattle drank
their pools of shadow from an older sky,
surviving from when the landscape copied such objects as
'Herefords at Sunset in the valley of the Wye.'
The mountain water that fell white from the mill wheel
sprinkling like petals from the star-apple trees,
and all of the windmills and sugar mills moved by mules
on the treadmill of Monday to Monday, would repeat
in tongues of water and wind and fire, in tongues
of Mission School pickaninnies, like rivers remembering
their source, Parish Trelawny, Parish St David, Parish
St Andrew, the names afflicting the pastures,
the lime groves and fences of marl stone and the cattle
with a docile longing, an epochal content.
And there were, like old wedding lace in an attic,
among the boas and parasols and the tea-colored
daguerreotypes, hints of an epochal happiness
as ordered and infinite to the child
as the great house road to the Great House
down a perspective of casuarinas plunging green manes
in time to the horses, an orderly life
reduced by lorgnettes day and night, one disc the sun,
the other the moon, reduced into a pier glass:
nannies diminished to dolls, mahogany stairways
no larger than those of an album in which
the flash of cutlery yellows, as gamboge as
the piled cakes of teatime on that latticed
bougainvillea verandah that looked down toward
a prospect of Cuyp-like Herefords under a sky
lurid as a porcelain souvenir with these words:
'Herefords at Sunset in the Valley of the Wye.'

Strange, that the rancor of hatred hid in that dream
of slow rivers and lily-like parasols, in snaps
of fine old colonial families, curled at the edge
not from age of from fire or the chemicals, no, not at all,
but because, off at its edges, innocently excluded
stood the groom, the cattle boy, the housemaid, the gardeners,
the tenants, the good Negroes down in the village,
their mouth in the locked jaw of a silent scream.
A scream which would open the doors to swing wildly
all night, that was bringing in heavier clouds,
more black smoke than cloud, frightening the cattle
in whose bulging eyes the Great House diminished;
a scorching wind of a scream
that began to extinguish the fireflies,
that dried the water mill creaking to a stop
as it was about to pronounce Parish Trelawny
all over, in the ancient pastoral voice,
a wind that blew all without bending anything,
neither the leaves of the album nor the lime groves;
blew Nanny floating back in white from a feather
to a chimerical, chemical pin speck that shrank
the drinking Herefords to brown porcelain cows
on a mantelpiece, Trelawny trembling with dusk,
the scorched pastures of the old benign Custos; blew
far the decent servants and the lifelong cook,
and shriveled to a shard that ancient pastoral
of dusk in a gilt-edged frame now catching the evening sun
in Jamaica, making both epochs one.

He looked out from the Great House windows on
clouds that still held the fragrance of fire,
he saw the Botanical Gardens officially drown
in a formal dusk, where governors had strolled
and black gardeners had smiled over glinting shears
at the lilies of parasols on the floating lawns,
the flame trees obeyed his will and lowered their wicks,
the flowers tightened their fists in the name of thrift,
the porcelain lamps of ripe cocoa, the magnolia's jet
dimmed on the one circuit with the ginger lilies
and left a lonely bulb on the verandah,
and, had his mandate extended to that ceiling
of star-apple candelabra, he would have ordered
the sky to sleep, saying, I'm tired,
save the starlight for victories, we can't afford it,
leave the moon on for one more hour, and that's it.
But though his power, the given mandate, extended
from tangerine daybreaks to star-apple dusks,
his hand could not dam that ceaseless torrent of dust
that carried the shacks of the poor, to their root-rock music,
down the gullies of Yallahs and August Town,
to lodge them on thorns of maca, with their rags
crucified by cactus, tins, old tires, cartons;
from the black Warieka Hills the sky glowed fierce as
the dials of a million radios,
a throbbing sunset that glowed like a grid
where the dread beat rose from the jukebox of Kingston.
He saw the fountains dried of quadrilles, the water-music
of the country dancers, the fiddlers like fifes
put aside. He had to heal
this malarial island in its bath of bay leaves,
its forests tossing with fever, the dry cattle
groaning like winches, the grass that kept shaking
its head to remember its name. No vowels left
in the mill wheel, the river. Rock stone. Rock stone.

The mountains rolled like whales through phosphorous stars,
as he swayed like a stone down fathoms into sleep,
drawn by that magnet which pulls down half the world
between a star and a star, by that black power
that has the assassin dreaming of snow,
that poleaxes the tyrant to a sleeping child.
The house is rocking at anchor, but as he falls
his mind is a mill wheel in moonlight,
and he hears, in the sleep of his moonlight, the drowned
bell of Port Royal's cathedral, sees the copper pennies
of bubbles rising from the empty eye-pockets
of green buccaneers, the parrot fish floating
from the frayed shoulders of pirates, sea horses
drawing gowned ladies in their liquid promenade
across the moss-green meadows of the sea;
he heard the drowned choirs under Palisadoes,
a hymn ascending to earth from a heaven inverted
by water, a crab climbing the steeple,
and he climbed from that submarine kingdom
as the evening lights came on in the institute,
the scholars lamplit in their own aquarium,
he saw them mouthing like parrot fish, as he passed
upward from that baptism, their history lessons,
the bubbles like ideas which he could not break:
Jamaica was captured by Penn and Venables,
Port Royal perished in a cataclysmic earthquake.

Before the coruscating faÃ§ades of cathedrals
from Santiago to Caracas, where penitential archbishops
washed the feet of paupers (a parenthetical moment
that made the Caribbean a baptismal font,
turned butterflies to stone, and whitened like doves
the buzzards circling municipal garbage),
the Caribbean was borne like an elliptical basin
in the hands of acolytes, and a people were absolved
of a history which they did not commit;
the slave pardoned his whip, and the dispossessed
said the rosary of islands for three hundred years,
a hymn that resounded like the hum of the sea
inside a sea cave, as their knees turned to stone,
while the bodies of patriots were melting down walls
still crusted with mute outcries of La Revolucion!
'San Salvador, pray for us,St. Thomas, San Domingo,
ora pro nobis, intercede for us, Sancta Lucia
of no eyes,' and when the circular chaplet
reached the last black bead of Sancta Trinidad
they began again, their knees drilled into stone,
where Colon had begun, with San Salvador's bead,
beads of black colonies round the necks of Indians.
And while they prayed for an economic miracle,
ulcers formed on the municipal portraits,
the hotels went up, and the casinos and brothels,
and the empires of tobacco, sugar, and bananas,
until a black woman, shawled like a buzzard,
climbed up the stairs and knocked at the door
of his dream, whispering in the ear of the keyhole:
'Let me in, I'm finished with praying, I'm the Revolution.
I am the darker, the older America.'

She was as beautiful as a stone in the sunrise,
her voice had the gutturals of machine guns
across khaki deserts where the cactus flower
detonates like grenades, her sex was the slit throat
of an Indian, her hair had the blue-black sheen of the crow.
She was a black umbrella blown inside out
by the wind of revolution, La Madre Dolorosa,
a black rose of sorrow, a black mine of silence,
raped wife, empty mother, Aztec virgin
transfixed by arrows from a thousand guitars,
a stone full of silence, which, if it gave tongue
to the tortures done in the name of the Father,
would curdle the blood of the marauding wolf,
the fountain of generals, poets, and cripples
who danced without moving over their graves
with each revolution; her Caesarean was stitched
by the teeth of machine guns,and every sunset
she carried the Caribbean's elliptical basin
as she had once carried the penitential napkins
to be the footbath of dictators, Trujillo, Machado,
and those whose faces had yellowed like posters
on municipal walls. Now she stroked his hair
until it turned white, but she would not understand
that he wanted no other power but peace,
that he wanted a revolution without any bloodshed,
he wanted a history without any memory,
streets without statues,
and a geography without myth. He wanted no armies
but those regiments of bananas, thick lances of cane,
and he sobbed,'I am powerless, except for love.'
She faded from him, because he could not kill;
she shrunk to a bat that hung day and night
in the back of his brain. He rose in his dream. 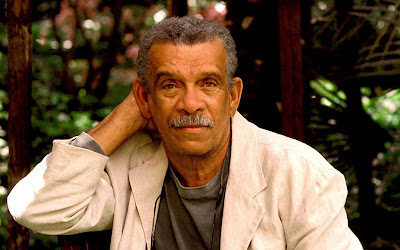 Posted by Anonymous at 9:00 PM