Book of Horses
there was the first horse
and then the last;
the scheme of horses in between
is immaterial (to say they were muscle
is being kind, they were meat)
but the first horse was the horsehead—
high angular white bones
and sinew—and the great matter of him broke meaning open
like a disclosure, and there, where he lived, lay the river of the canyon,
all white-tipped like a righteous migration of spines,
and he stilled the water by his will alone
to better see the startling symmetry of his reflection,
his charge moving him
somehow faster than the breath's steady luggage,
across the neckline of the field,
and up and over sugar cane, always
toward starvation: for as terrifying as it is,
forever is a solid,
and from that firstfoal followed his blood
like the flood that begins at the mount
and streams and cheats and even seems to grow
by rain that falls by the torso
but loses itself through the corn husks
and understory until it is thinner
than the water that comes from a wound
and it settles in the ditch of a cul-de-sac, at rest as a lie. 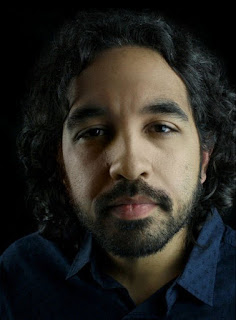