Saw someone yesterday looked like you did,
Being short with long blond hair, a sturdy kid
Ahead of me in line. I gazed and gazed
At his good back, feeling again, amazed,
That almost envious sexual tension which
Rubbing at made the greater, like an itch,
An itch to steal or otherwise possess
The brilliant restive charm, the boyishness
That half-aware—and not aware enough—
Of what it did, eluded to hold off
The very push of interest it begot,
As if you’d been a tease, though you were not.
I hadn’t felt it roused, to tell the truth,
In several years, that old man’s greed for youth,
Like Pelias’s that boiled him to a soup,
Not since I’d had the sense to cover up
My own particular seething can of worms,
And settle for a friendship on your terms.

Meanwhile I had to look: his errand done,
Without a glance at me or anyone,
The kid unlocked his bicycle outside,
Shrugging a backpack on. I watched him ride
Down 18th Street, rising above the saddle
For the long plunge he made with every pedal,
Expending far more energy than needed.
If only I could do whatever he did,
With him or as a part of him, if I
Could creep into his armpit like a fly,
Or like a crab cling to his golden crotch,
Instead of having to stand back and watch.
Oh complicated fantasy of intrusion
On that young sweaty body. My confusion
Led me at length to recollections of
Another’s envy and his confused love.

That Fall after you died I went again
To where I had visited you in your pain
But this time for your—friend, roommate, or wooer?
I seek a neutral term where I’m unsure.
He lay there now. Figuring she knew best,
I came by at his mother’s phoned request
To pick up one of your remembrances,
A piece of stained-glass you had made, now his,
I did not even remember, far less want.
To him I felt, likewise, indifferent.

“You can come in now,” said the friend-as-nurse.
I did, and found him altered for the worse.
But when he saw me sitting by his bed,
He would not speak, and turned away his head.
I had not known he hated me until
He hated me this much, hated me still.
I thought that we had shared you more or less,
As if we shared what no one might possess,
Since in a net we sought to hold the wind.
There he lay on the pillow, mortally thinned,
Weaker than water, yet his gesture proving
As steady as an undertow. Unmoving
In the sustained though slight aversion, grim
In wordlessness. Nothing deflected him,
Nothing I did and nothing I could say.
And so I left. I heard he died next day.

I have imagined that he still could taste
That bitterness and anger to the last,
Against the roles he saw me in because
He had to: of victor, as he thought I was,
Of heir, as to the cherished property
His mother—who knows why?—was giving me,
And of survivor, as I am indeed,
Recording so that I may later read
Of what has happened, whether between sheets,
Or in post offices, or on the streets. 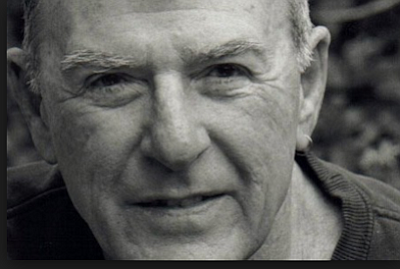