Better or Worse by Heather McHugh

Daily, the kindergarteners
passed my porch. I loved
their likeness and variety,
their selves in line like little
monosyllables, but huggable—
I wasn't meant

to grab them, ever,
up into actual besmooches or down
into grubbiest tumbles, my lot was not
to have them, in the flesh.
Was it better or worse to let
their lovability go by untouched, and just
watch over their river of ever-
inbraiding relations? I wouldn't
mother them or teach. We couldn't be
each other's others; maybe,
at removes, each other's each.

Each toddler had a hand-hold on
a loop of rope, designed to haul
the whole school onward
in the sidewalk stream—
like pickerel through freshets,
at the pull of something else's will, the children
spun and bobbled, three years old and four
(or were they little drunken Buddhas,
buoyant, plump?). They looked
now to the right, now to the sky, and now
toward nothing (nothing was too small)—
they followed a thread of destination,
chain of command, order of actual rope that led

to what? Who knew?

For here and now in one child's eye there was a yellow truck,
and in another's was a burning star; but from my own perspective,
overhead, adult, where trucks and suns had lost their luster,
they were one whole baby-rush toward
a target, toward the law
of targets, fledge
in the wake of an arrowhead;

a bull's-eye bloomed, a red
eight-sided sign. What
did I wish them?
Nothing I foresaw. 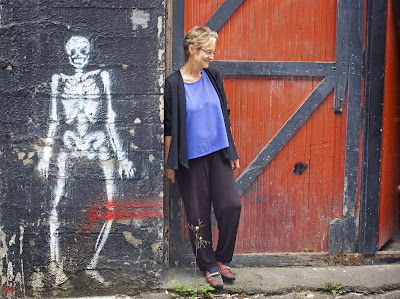