Bending over her bed, I saw the smile
I must have seen when gaping up from the crib.
Knowing death will come, sensing its onset,
may be a fair price for consciousness.
But looking at my sister, I wished
she could have died by surprise,
without ever knowing about death.
Too late. Wendy said, “I am in three parts.
Here on the left is red. That is pain.
On the right is yellow. That is exhaustion.
The rest is white. I don’t know yet what white is.”
For most people, one day everything is all right.
The next, the limbic node catches fire. The day after,
the malleus in one ear starts missing the incus.
Then the arthritic opposable thumb no longer opposes
whoever last screwed the top onto the jam jar.
Then the coraco-humeral ligament frizzles apart,
the liver speckles, the kidneys dent,
two toes lose their souls. Of course,
before things get worse, a person could run for it.
I could take off right now, climb the pure forms
that surmount time and death, follow a line
down Avenue D, make a 90° turn right on 8th Street,
90° left on C, right on 7th, left on B, then cross
to Sixth Avenue, catch the A train
to Nassau, where the A pulls up beside the Z,
get off, hop on the Z, hurtle under the river
and rise on Euclid under the stars and taste,
with my sweetheart, in perfectly circular kisses,
the actual saliva of paradise.
Then, as if Wendy suddenly understood
this flaw in me, that I could die
still wanting what is not to be had here, drink
and drink and yet have most of my thirst
intact for the water table, she opened her eyes.
“I want you to know I’m not afraid of dying,”
she said. “I just wish it didn’t take so long.”
Seeing her appear so young and yet begin to die
all on her own, I wanted to whisk her off.
Quickly she said, “Let’s go home.” From outside
in the driveway came the gargling noise
of a starter motor, and a low steady rumbling, as if
my car had turned itself on and was warming up the engine.
She closed her eyes. She was entirely white,
as if freshly powdered with twice-bleached flour.
Color flashed only when she opened her eyes.
Snow will come down next winter, in the woods;
the fallen trees will have that flesh on their bones.
When the eye of the woods opens, a bluejay shuttles.
Outside, suddenly, all was quiet,
I realized my car had shut off its engine.
Now a spot of rosiness showed in each cheek:
blushes, perhaps, at a joy she had kept from us,
from somewhere in her life, perhaps two mouths,
hers and a beloved’s, near each other, like roses
sticking out of a bottle of invisible water.
She was losing the half-given, half-learned
art of speech, and it became for her a struggle
to find words, form them, position them,
quickly say them. After much effort she said,
“Now is when the point of the story changes.”
After that, one eye at a time, the left listened,
and drifted, the right focused, gleamed
meanings at me, drifted. Stalwart,
the halves of the brain, especially the right.
Now, as they ratchet the box that holds
her body into the earth, a voice calls
back across the region she passes through,
a far landscape I seem to see from above,
in prolonged, even notes that swell and diminish.
Now it sounds from beneath the farthest horizon,
and now it grows faint, and now I cannot hear it. 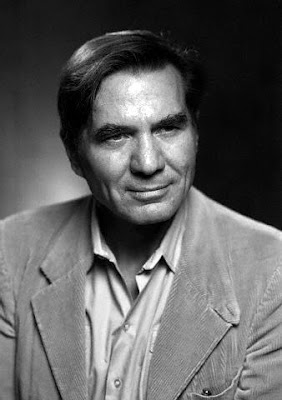 Posted by Anonymous at 8:57 AM