The Death of Marilyn Monroe by Sharon Olds

The Death of Marilyn Monroe

The ambulance men touched her cold
body, lifted it, heavy as iron,
onto the stretcher, tried to close the
mouth, closed the eyes, tied the
arms to the sides, moved a caught
strand of hair, as if it mattered,
saw the shape of her breasts, flattened by
gravity, under the sheet
carried her, as if it were she,
down the steps.

These men were never the same. They went out
afterwards, as they always did,
for a drink or two, but they could not meet
each other's eyes.

Their lives took
a turn -- one had nightmares, strange
pains, impotence, depression. One did not
like his work, his wife looked
different, his kids. Even death
seemed different to him -- a place where she
would be waiting,

and one found himself standing at night
in the doorway to a room of sleep, listening to a
woman breathing, just an ordinary
woman
breathing. 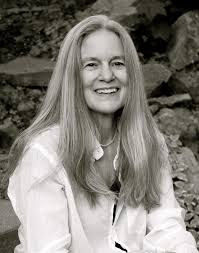