Ending the Estrangement by Ross Gay

from my mother's sadness, which was,
to me, unbearable, until,
it felt to me
not like what I thought it felt like
to her, and so felt inside myself—like death,
like dying, which I would almost
have rather done, though adding to her sadness
would rather die than do—
but, by sitting still, like what, in fact, it was—
a form of gratitude
which when last it came
drifted like a meadow lit by torches
of cardinal flower, one of whose crimson blooms,
when a hummingbird hovered nearby,
I slipped into my mouth
thereby coaxing the bird
to scrawl on my tongue
its heart's frenzy, its fleet
nectar-questing song,
with whom, with you, dear mother,
I now sing along. 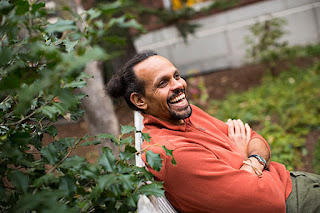