I remember she rented a room on the second floor from Jenny Holtzerman, an Austrian widow. The two women lived on Girard Avenue South, in Kenwood, an elegant suburb of Minneapolis. Any promise of husbands had disappeared long ago. From the kitchen I often remember the jelly smell of a linzer torte. I was in high school and often I eavesdropped. Once, quietly, she said to my mother, “I never knew the love of a man.” She had mentioned having a husband, but during the war they were separated in the chaos of Budapest, and later she lost track of him. Once she showed me her room: the walls were bare with cracks. Her daybed was narrow, barely slept-in. Her room resembled hundreds of scant little rooms around the world, the way it accepted blue and purple-violet detail—on her bureau, no family photographs, instead, playbills autographed by cast members, a calendar tattered, crossed, marked, no jewelry, some coins. Her window sashes warped, her wires shorted and the paint around her doorframe kept chipping off—“like in The Cherry Orchard,” she said, “by Chekhov.” She told a joke in Hungarian to Hannah Tamasek and even I, not knowing a word, laughed. She bowed gently in a mannerism distinctly Viennese and spoke on occasion of the Austro-Hungarian Empire. She loved the Guthrie Theater, where curtains rose on miniature worlds, preferring memorized dialogue and costumes to something truer. Five feet tall in orthopedic shoes, she limped. Time has a way of rearranging things and I could have most details wrong now, but there was this: during the war, she met a man, whom she gave money to, she did not know the man well, but had trusted him to smuggle her father across the border, the man pocketed the money, bought chocolates for his mistress from Belgium, and placed Margaret’s father on a train to Auschwitz. So it makes sense to me now that simple decisions baffled Margaret. It makes sense to me now that when news reached us of Primo Levi’s suicide, Margaret did not blink. It makes sense to me now that when Dr. Sikorski spoke of fighting in the Warsaw sewers, Margaret said, “I do not believe in God.” Those who saw what they saw grow fewer. Margaret has been dead a long time now. But perhaps you will understand why I chose her, why I have smudged the slow waltz of her smile and added only a few modest blue strokes—here and here. As you leave Margaret behind and turn the page, listen as the page falls back and your hand gently buries her. This is what the past sounds like. 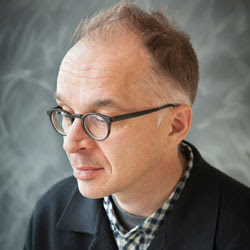