The Mud Vision by Seamus Heaney

Statues with exposed hearts and barbed-wire crowns
Still stood in alcoves, hares flitted beneath
The dozing bellies of jets, our menu-writers
And punks with aerosol sprays held their own
With the best of them. Satellite link-ups
Wafted over us the blessings of popes, heliports
Maintained a charmed circle for idols on tour
And casualties on their stretchers. We sleepwalked
The line between panic and formulae, screentested
Our first native models and the last of the mummers,
Watching ourselves at a distance, advantaged
And airy as a man on a springboard
Who keeps limbering up because the man cannot dive.

And then in the foggy midlands it appeared,
Our mud vision, as if a rose window of mud
Had invented itself out of the glittery damp,
A gossamer wheel, concentric with its own hub
Of nebulous dirt, sullied yet lucent.
We had heard of the sun standing still and the sun
That changed colour, but we were vouchsafed
Original clay, transfigured and spinning.
And then the sunsets ran murky, the wiper
Could never entirely clean off the windscreen,
Reservoirs tasted of silt, a light fuzz
Accrued in the hair and the eyebrows, and some
Took to wearing a smudge on their foreheads
To be prepared for whatever. Vigils
Began to be kept around pudddled gaps,
On altars bulrushes ousted the lilies
And a rota of invalids came and went
On beds they could lease placed in range of the shower.

A generation who had seen a sign!
Those nights when we stood in an umber dew and smelled
Mould in the verbena, or woke to a light
Furrow-breath on the pillow, when the talk
Was all about who had seen it and our fear
Was touched with a secret pride, only ourselves
Could be adequate then to our lives. When the rainbow
Curved flood-brown and ran like a water-rat's back
So that drivers on the hard shoulder switched off to watch,
We wished it away, and yet we presumed it a test
That would prove us beyond expectation.

We lived, of course, to learn the folly of that.
One day it was gone and the east gable
Where its trembling corolla had balanced
Was starkly a ruin again, with dandelions
Blowing high up on the ledges, and moss
That slumbered on through its increase. As cameras raked
The site from every angle, experts
Began their post factum jabber and all of us
Crowded in tight for the big explanations.
Just like that, we forgot that the vision was ours,
Our one chance to know the incomparable
And dive to a future. What might have been origin
We dissipated in news. The clarified place
Had retrieved neither us nor itself -- except
You could say we survived. So say that, and watch us
Who had our chance to be mud-men, convinced and estranged,
Figure in our own eyes for the eyes of the world. 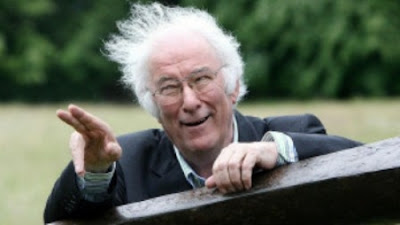