This steel shell memorial to two lives,
a composer and his singer, looms at me
before sun-up like a guardian of the earth –
or a freezing North Sea re-run of the birth
of Aphrodite. Dark, says the sculptor
in her book. Dark like a wave born
backwards, shattering as it breaks.
Light and dark like life and death,
part shining and part rust, with movement
between colours as between the forms.
I creep in and run my hand along a frilled
bronze rim. A bivalve – two shells or
a single broken one self-joining at the core.
I think of the philandering sigh of ocean,
life-long partners betraying and forgiving
and Plato’s cave: the fire, the sun

and how, arguing against his gift, he banned
artists for reflecting our world back
with a false beauty, making real unreal,
enticing us to take the shadow for the thing.
I gaze out, invisible as Echo,
at a lead gauze sea. Over my head
the breaker’s cusp is a fanned-card silhouette.
Round the edge, letters punched out of metal
like finger-holes in a flute, write in paling sky,
I hear the voices of the drowned. Iron cloud
on the horizon splices day from night
like west from east. On the news
is flat-to-flat urban warfare in Aleppo
and air attacks on Gaza. Over here, in kitchens,
at the Tuesday evening pub quiz, on the bus or tube,
how quickly arguments flare up

even in England; even if we’ve never been
to what we call the middle of the east.
We identify. Some chasm through the centre
must be in and of us all: creatures of relation
and division, always wrong-footed by the past
on its bed of ice, the sub-tectonic clash
of ancient histories on common ground.
Suddenly I see this rifted arabesque,
a monument to music joined only at its core,
is all of us. Harmonia’s gift is cursed.
She can’t help it, she’s Aphrodite’s child –
one false note and what you get is discord –
and her father, lord of war,
is Apollo’s enemy. East or west, the first thing
looting soldiers smash (before starting on God’s
perfect instrument, the larynx) is an oud or violin.

Sing the sadness and pain of Sabah,
the microtonal range of the maqam.
Hijaz, conjuring distant desert
and our longing for it. Sing the body:
tongue and teeth to whistle through,
palms to clap, lips to hum, vibrate
or tremble, and the fragile, mucus-laden
vox humana. Sing also of David’s harp
placed sideways on the mountain, pitched
to catch wind blowing from rocks
below the tower of Lebanon which looks
toward the oldest city in the world –
whose sky burns indigo, dark-pearled
as strong espresso, above the fountain
in Umayyad Mosque. Where children
used to lick orchid-root ice cream

from Bakdash Parlour and now play
Asking-for-Papers-of-Identity-
at-Gun-Point. Where Saladin
and the head of John the Baptist
both lie buried. Where old men
with pewter urns poured tamarisk-
flavour liquorice in sudden jumps,
the way a flat stone skims water.
Al Fayha, Fragrant City, home
to rosa damascena and the damask plum:
these dawn-lit pebbles of the west
glow like your hieroglyph intarsia
whose weavers set compound floats
of warp and weft at angles to reflect
light scatter-wise, depending who you are
and where you’re looking from.

What will survive are meanings we have found
in what the world has made. Like the calm
rufous freckling of those burnished steps –
infused with cardamom, I remember –
to Al-Hamidiyah Souq beside the citadel.
And at the top, strings of hanging flip-flops,
rosewood sets of backgammon like puzzle books
inlaid with mother-of-pearl, glinting gargoyle fish
and stalls of uncut samite, whose glitter-twill
depends on optic interference like the play of light
in Damascus Twist, the iron-plait steel
of sword blades and gun-barrels:
the mystery metal welded in carbon fire
which can cut a rifle muzzle or a hair
floating across a dagger. Whose laminate spirals,
acid-bitten into waves, resemble damask.

What would we be without desire for form?
Pattern keeps us safe. We look for omens in a flock
of redwing, the gods’ will in dappled entrails,
the outline of a story in the stars. We break the line
to shape it, string catgut over membrane,
set up a ten-foot memorial
to music – a scallop shell, a pilgrim’s prayer –
in shale of an eroding coast
and turn it east to face the storm.
Voices of the drowned. I watch dawn
gild the sea to iridescence. Sea-birds arc
and squawk and flicker-print the air.
Breakers roar on draining shingle.
Palmetto patterns dint the waves
from grey to silver, hyacinth and jade.
Making is our defence against the dark. 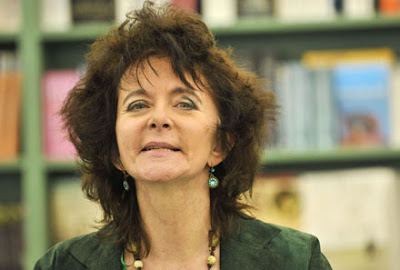 Posted by Anonymous at 9:56 AM