People always say that I didn't give up my seat because I was tired, but that isn't true. I was not tired physically, or no more tired than I usually was at the end of a working day. No--the only thing I was--was tired of giving in.
--Rosa Parks

The game: Pay your Indian head to the driver,
then get off the bus.
Then, walk to the door at the end of the bus.
Then, reboard the bus through the Black back door.
(Then, push repeat for fifty years.)

Sometimes, the driver pulled off,
before the paid-in-full customer
could get to the one open door.

Fed up with buses driving off--without them--
just as her foot lifted up, grazing, the steel step:

She was not a child. She was in her forties.
A seamstress. A woman devoted to
handmade things.

A seamstress brings fabric and thread, collars & hems,
buttonholes, together. She is one who knows her way
around velvet.

Arching herself over a river of cloth she feels for the bias,
but doesn't cut, not until the straight pins are in place,
marking everything: in time, everything will come together.

Nine months after, December 1, 1955, Claudette
Colvin, fifteen, arrested for keeping her seat; before that,
Mary Louise Smith. The time to act, held by two pins.

The Montgomery seamstress waits and waits for
the Cleveland Avenue bus. She climbs aboard,
row five. The fifth row is the first row of the Colored
section. The bus driver, who tried to put her off that day,
had put her off twelve years before. But twelve years
before she was only twenty-eight, still a child to the
heavy work of resistance.

By forty-two, you have pieced & sewn many things
together in segregated Alabama. You have heard
"Nigger Gal" more times than you can stitch your
manners down. You have smelled fear cut through
the air like sulfur iron from the paper mills. The pants,
shirts, and socks that you have darned perfectly, routinely,
walk perfectly, routinely, by you. (Afternoon. How do.)
Those moving along so snug in your well-made, well-sewn
clothes, spit routinely, narrowly missing your perfectly
pressed sleeve.

By forty-two, your biases are flat, your seams are inter-
locked, your patience with fools, razor thin.

By forty-two, your heart is heavy with slavery, lynching,
and the lessons of being "good." You have heard
7,844 Sunday sermons on how God made every
woman in his image. You do a lot of thinking with
a thimble on your thumb. You have hemmed
8,230 skirts for nice, well-meaning white women
in Montgomery. You have let the hem out of
18,809 pant legs for growing white boys. You have
pricked your finger 45,203 times. Held your peace.

December 1, 1955: You didn't notice who was
driving the bus. Not until you got on. Later you
would remember, "All I wanted was to get home."
The bus driver, who put you off when you were
twenty-eight, would never be given the pleasure
of putting you off anything ever again. When he
asks you to move you cross your feet at the ankle.

Well--I'm going to have you arrested.

And you, you with your forty-two years, with your
21,199 perfect zippers, you with your beautiful
nation of perfect seams marching all in place, all
around Montgomery, Alabama, on the backs &
hips of Black & white alike, answer him back,

Well--You may go on and do so.

You are arrested on a Thursday. That night in
Montgomery, Dr. King led the chant, "There
comes a time when people just get tired." (He
wasn't quite right, but he was King.) He asked
you to stand so your people can see you. You
stand. Veritas! You do not speak. The indelible
blue ink still on your thumb saying, Enough!
You think about the qualities of velvet: strength
& sway. How mighty it holds the thread and
won't let go. You pull your purse in close,
the blue lights map out your thumb, blazing
the dark auditorium.

On Courthouse Monday, the sun day dew
sweating the grass, you walk up the sidewalk
in a long-sleeved black dress, your white collar
and deep perfect cuffs holding you high and
starched in the Alabama air. A trim black velvet
hat, a gray coat, white gloves. You hold your
purse close: everything valuable is kept near
the belly, just like you had seen your own mother
do. You are pristine. Persnickety. Particular.
A seamstress. Every thing about you gathered
up and in place. A girl in the crowd, taught not to
shout, shouts, "Oh! She's so sweet looking! Oh!
They done messed with the wrong one now."

You cannot keep messing with a sweet-looking
Black woman who knows her way around velvet.
A woman who can take cotton and gabardine,
seersucker and silk, swirl tapestry, and hang
boiled wool for the house curtains, to the very
millimeter. A woman made of all this is never to
be taken for granted, never to be asked to move
to the back of anything, never ever to be arrested.

A woman who believes she is worthy of every
thing possible. Godly. Grace. Good. Whether you
believe it or not, she has not come to Earth to play
Ring Around Your Rosie on your rolling
circus game of public transportation.

A woman who understands the simplicity pattern,
who wears a circle bracelet of straight pins there,
on the tiny bend of her wrist. A nimble, on-the-dot
woman, who has the help of all things, needle sharp,
silver, dedicated, electric, can pull cloth and others
her way, through the tiny openings she and others
before her have made.

A fastened woman
can be messed with, one too many times.

With straight pins poised in the corner
of her slightly parted lips, waiting to mark
the stitch, her fingers tacking,
looping the blood red wale,
through her softly clenched teeth
she will tell you, without ever looking
your way, 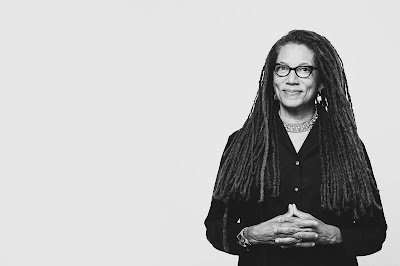