I woke up to piss, and then to wake
the kids it was my charge to wake.
In the little bowl of the field of our camp
the dozens of tents rose weirdly up
in the lingering low fog like stationary sails,
like ships in opening ice. The sun’s
slit eye ghosted distant from the east;
the made world glanced at the unmade.

Awake before me, in nothing but shorts,
towel slung slack across his neck,
the small boy danced an awkward sideways
dance across the just unfrozen ground,
his bare feet locked in fog, his skin—
musculature lithe beneath it sliding
liquid and adult—bristling with cold,
white gleaming lunar in the morning air.

Behind me, a body turned in its tent,
then another, then from inside the tarps
the waking voices of adolescent boys.
I imagined them cycling the intimate air
moist with sleep, and their breathing skin
bare, and some of them hard, and some
sweating incommunicable dreams—

Turning from them, and from my own response,
I wandered toward woods that stretched
the previous night impenetrably far,
now a band of trees just three or four deep—
and at the back of it a makeshift fence,
three lines of wire stapled into bark,
ridiculous, forceless, yet gathered there
six cows stood worshipful and blank.

Coming to them quietly I watched
their pastoral loveliness melt away
to uninflectable abjection: legs and stomachs slick
with excrement; nostrils caked with mucus
and flies, flaring at my scent; their own scent,
stinging and sweet at once, stomach-
churningly strong; and piercing each ear,
sole adornment, an orange plastic disc

counting them out for slaughter. Until some fine
invisible line between us snapped
they let me close; then, disturbed, leaned
sudden as a body back. I took
a small red apple from my jacket and reached
my arm out over the fence and stood,
the waxed skin gleaming dully in my hand,
unclear emblem of something generous

and empty and good. The closest one,
the least afraid, slowly stretched its neck
to sniff my hand, then pulled back its lips
and took the fruit in its teeth, alien eyes locked
humanly ahead. What did I stand there
wanting? The slack jaws worked
the white flesh referenceless, grinding
a momentary sweetness out. 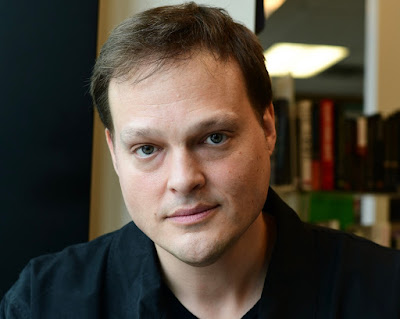 Posted by Anonymous at 7:20 AM