Between the Wars by Robert Hass

When I ran, it rained. Late in the afternoon—
midsummer, upstate New York, mornings I wrote,
read Polish history, and there was a woman
whom I thought about; outside the moody, humid
American sublime—late in the afternoon,
toward sundown, just as the sky was darkening,
the light came up and redwings settled in the cattails.
They were death's idea of twilight, the whole notes
of a requiem the massed clouds croaked
above the somber fields. Lady of eyelashes,
do you hear me? Whiteness, otter's body,
coolness of the morning, rubbed amber
and the skin's salt, do you hear me? This is Poland speaking,
“era of the dawn of freedom,” nineteen twenty-two.
When I ran, it rained. The blackbirds settled
their clannish squabbles in the reeds, and light came up.
First darkening, then light. And then pure fire.
Where does it come from? out of the impure
shining that rises from the soaked odor of the grass,
the levitating, Congregational, meadow-light-at-twilight
light that darkens the heavy-headed blossoms
of wild carrot, out of that, out of nothing
it boils up, pools on the horizon, fissures up,
igniting the undersides of clouds: pink flame,
red flame, vermilion, purple, deeper purple, dark.
You could wring the sourness of the sumac from the air,
the fescue sweetness from the grass, the slightly
maniacal cicadas tuning up to tear the fabric
of the silence into tatters, so that night,
if it wants to, comes as a beggar to the door
at which, if you do not offer milk and barley
to the maimed figure of the god, your well will foul,
your crops will wither in the fields. In the eastern marches
children know the story that the aspen quivers
because it failed to hide the Virgin and the Child
when Herod's hunters were abroad. Think: night is the god
dressed as the beggar drinking the sweet milk.
Gray beard, thin shanks, the look in the eyes
idiot, unbearable, the wizened mouth agape,
like an infant's that has cried and sucked and cried
and paused to catch its breath. The pink nubbin
of the nipple glistens. I'll suckle at that breast,
the one in the song of the muttering illumination
of the fields before the sun goes down, before
the black train crosses the frontier from Prussia
into Poland in the age of the dawn of freedom.
Fifty freight cars from America, full of medicine
and the latest miracle, canned food.
The war is over. There are unburied bones
in the fields at sun-up, skylarks singing,
starved children begging chocolate on the tracks. 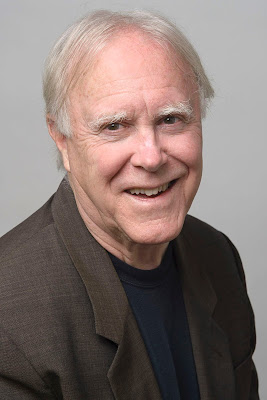 Posted by Anonymous at 6:48 AM