What He Thought by Heather McHugh

We were supposed to do a job in Italy
and, full of our feeling for
ourselves (our sense of being
Poets from America) we went
from Rome to Fano, met
the Mayor, mulled a couple
matters over. The Italian literati seemed
bewildered by the language of America: they asked us
what does “flat drink” mean? and the mysterious
“cheap date” (no explanation lessened
this one’s mystery). Among Italian writers we

could recognize our counterparts: the academic,
the apologist, the arrogant, the amorous,
the brazen and the glib. And there was one
administrator (The Conservative), in suit
of regulation gray, who like a good tour guide
with measured pace and uninflected tone
narrated sights and histories
the hired van hauled us past.
Of all he was most politic—
and least poetic-- so
it seemed. Our last few days in Rome
I found a book of poems this
unprepossessing one had written: it was there
in the pensione room (a room he’d recommended)
where it must have been abandoned by
the German visitor (was there a bus of them?) to whom
he had inscribed and dated it a month before. I couldn’t
read Italian either, so I put the book
back in the wardrobe’s dark. We last Americans

were due to leave
tomorrow. For our parting evening then
our host chose something in a family restaurant,
and there we sat and chatted, sat and chewed, till,
sensible it was our last big chance to be Poetic, make
our mark, one of us asked

“What’s poetry?
Is it the fruits and vegetables
and marketplace at Campo dei Fiori

or the statue there?” Because I was
the glib one, I identified the answer
instantly, I didn’t have to think-- “The truth
is both, it’s both!” I blurted out. But that
was easy. That was easiest
to say. What followed taught me something
about difficulty,

for our underestimated host spoke out
all of a sudden, with a rising passion, and he said:

The statue represents
Giordano Bruno, brought
to be burned in the public square
because of his offence against authority, which was to say
the Church. His crime was his belief
the universe does not revolve around
the human being: God is no
fixed point or central government
but rather is poured in waves, through
all things: all things
move. “If God is not the soul itself,
he is the soul OF THE SOUL of the world.” Such was
his heresy. The day they brought him forth to die

they feared he might incite the crowd (the man
was famous for his eloquence). And so his captors
placed upon his face
an iron mask
in which he could not speak.

That is how they burned him.
That is how he died,
without a word,
in front of everyone. And poetry--

(we’d all put down our forks by now, to listen to
the man in gray; he went on softly)-- poetry

is what he thought, but did not say. 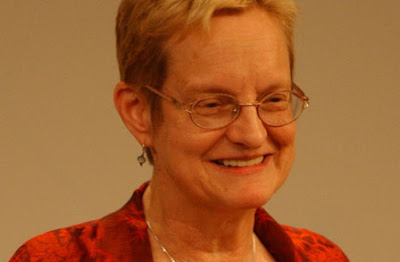 Posted by Anonymous at 9:39 PM