So on the seventh day
The serpent rested,
God came up to him.
"I've invented a new game," he said.

The serpent stared in surprise
At this interloper.
But God said: "You see this apple?"
I squeeze it and look-cider."

The serpent had a good drink
And curled up into a question mark.
Adam drank and said: "Be my god."
Eve drank and opened her legs

And called to the cockeyed serpent
And gave him a wild time.
God ran and told Adam
Who in drunken rage tried to hang himself in the orchard.

The serpent tried to explain, crying "Stop"
But drink was splitting his syllable.
And Eve started screeching: "Rape! Rape!"
And stamping on his head.

Now whenever the snake appears she screeches
"Here it comes again! Help! O Help!"
Then Adam smashes a chair on his head,
And God says: "I am well pleased"

And everything goes to hell. 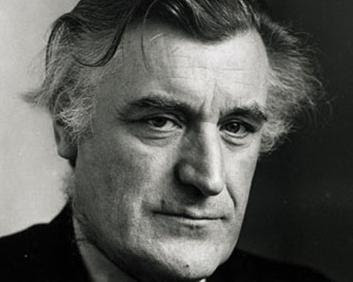 Posted by Anonymous at 6:48 PM