In Colorado My Father Scoured and Stacked Dishes by Eduardo C. Corral

In Colorado My Father Scoured and Stacked Dishes

in a Tex-Mex restaurant. His co-workers,
unable to utter his name, renamed him Jalapeño.

If I ask for a goldfish, he spits a glob of phlegm
into a jar of water. The silver letters

on his black belt spell Sangrón. Once, borracho,
at dinner, he said: Jesus wasn’t a snowman.

Arriba Durango. Arriba Orizaba. Packed
into a car trunk, he was smuggled into the States.

Frijolero. Greaser. In Tucson he branded
cattle. He slept in a stable. The horse blankets

oddly fragrant: wood smoke, lilac. He’s an illegal.
I’m an Illegal-American. Once, in a grove

of saguaro, at dusk, I slept next to him. I woke
with his thumb in my mouth. ¿No qué no

tronabas, pistolita? He learned English
by listening to the radio. The first four words

he memorized: In God We Trust. The fifth:
Percolate. Again and again I borrow his clothes.

He calls me Scarecrow. In Oregon he picked apples.
Braeburn. Jonagold. Cameo. Nightly,

to entertain his cuates, around a campfire,
he strummed a guitarra, sang corridos. Arriba

Durango. Arriba Orizaba. Packed into
a car trunk, he was smuggled into the States.

Greaser. Beaner. Once, borracho, at breakfast,
he said: The heart can only be broken

once, like a window. ¡No mames! His favorite
belt buckle: an águila perched on a nopal.

If he laughs out loud, his hands tremble.
Bugs Bunny wants to deport him. César Chávez

wants to deport him. When I walk through
the desert, I wear his shirt. The gaze of the moon

stitches the buttons of his shirt to my skin.
The snake hisses. The snake is torn. 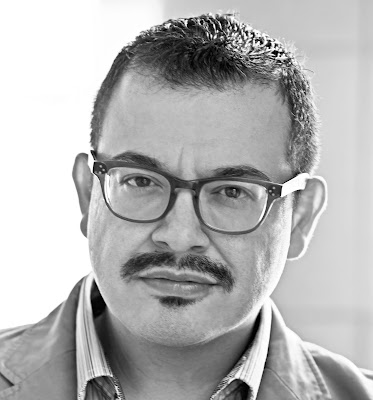 Posted by Anonymous at 8:23 PM