dirt and prickling grass, and I don’t fall off. I come down
soft if I choose, hard if I choose. I never float away.
Sometimes I want to be weightless on this planet, and so

I wade into a brown river or dive through a wave
and for a while feel nothing under my feet. Sometimes
I want to hear what it was like before the air, and so I duck
under the water and listen to the muted hums. I’m ashamed

to say that most days I forget this planet. That most days
I think about dentist appointments and plagiarists
and the various ways I can try to protect my body from itself.

Last weekend I saw Jupiter through a giant telescope,
its storm stripes, four of its sixty-seven moons, and was filled
with fierce longing, bitter that instead of Ganymede or Europa,
I had only one moon floating in my sky, the moon

crushed me. This morning this planet is so loud with itself—
its winds, its insects, its grackles and mourning doves—
that I can hardly hear my own lamentations. This planet.
All its grooved bark, all its sand of quartz and bones

and volcanic glass, all its creeping thistle lacing the yards
with spiny purple. I’m trying to come down soft today.
I’m trying to see this place even as I’m walking through it. 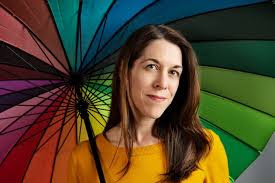 Posted by Anonymous at 9:19 PM