The School Play by James Merrill

"Harry of Hereford, Lancaster, and Derby,
Stands here for God, his country, and . . ." And what?
"Stands here for God, his Sovereign, and himself,"
Growls Captain Fry who had the play by heart.
I was the First Herald, "a small part"
--I was small too--"but an important one."
What was not important to the self
At nine or ten? Already I had crushes
On Mowbray, Bushy, and the Duke of York.
Handsome Donald Niemann (now himself,
According to the Bulletin, headmaster
Of his own school somewhere out West) awoke
Too many self-indulgent mouthings in
The dummy mirror before smashing it,
For me to set my scuffed school cap at him.
Another year I'd play that part myself,
Or Puck, or Goneril, or Prosepero.
Later, in adolescence, it was thought
Clever to speak of having found oneself,
With a smile and rueful headshake for those who hadn't.
People still do. Only the other day
A woman my age told us that her son
"Hadn't found himself"--at thirty-one!
I heard in the mind's ear an amused hum
Of mothers and fathers from beyond the curtain,
And that flushed, far-reaching hour came back
Months of rehearsal in the gymnasium
Had led to: when the skinny nobodies
Who'd memorized the verse and learned to speak it
Emerged in beards and hose (or gowns and rouge)
Vivid with character, having put themselves
All unsuspecting into the master's hands. 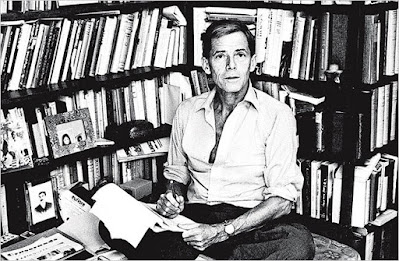