Instead, let it be the echo to every footstep
drowned out by rain, cripple the air like a name

flung onto a sinking boat, splash the kapok’s bark
through rot & iron of a city trying to forget

the bones beneath its sidewalks, then through
the refugee camp sick with smoke & half-sung

hymns, a shack rusted black & lit with Bà Ngoại’s
last candle, the hogs’ faces we held in our hands

& mistook for brothers, let it enter a room illuminated
with snow, furnished only with laughter, Wonder Bread

& mayonnaise raised to cracked lips as testament
to a triumph no one recalls, let it brush the newborn’s

flushed cheek as he’s lifted in his father’s arms, wreathed
with fishgut & Marlboros, everyone cheering as another

brown gook crumbles under John Wayne’s M16, Vietnam
burning on the screen, let it slide through their ears,

clean, like a promise, before piercing the poster
of Michael Jackson glistening over the couch, into

is her father, may it sing, briefly, inside her mouth,
before laying her down between jars of tomato

& blue boxes of pasta, the deep-red apple rolling
from her palm, then into the prison cell

god refused him, let it hit his jaw like a kiss
we’ve forgotten how to give one another, hissing

back to ’68, Ha Long Bay: the sky replaced
with fire, the sky only the dead

look up to, may it reach the grandfather fucking
the pregnant farmgirl in the back of his army jeep,

his blond hair flickering in napalm-blasted wind, let it pin
him down to dust where his future daughters rise,

from his neck, that name they press to their tongues
to relearn the word live, live, live—but if

for nothing else, let me weave this deathbeam
the way a blind woman stitches a flap of skin back

to her daughter’s ribs. Yes—let me believe I was born
to cock back this rifle, smooth & slick, like a true

Charlie, like the footsteps of ghosts misted through rain
as I lower myself between the sights—& pray 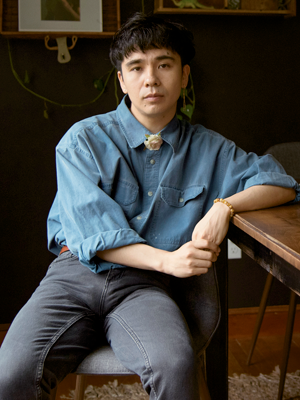 Posted by Anonymous at 8:00 AM