I Have a Seat in the Abandoned Theater by Mahmoud Darwish

I Have a Seat in the Abandoned Theater

I have a seat in the abandoned theater
in Beirut. I might forget, and I might recall
the final act without longing ... not because of anything
other than that the play was not written
skillfully ...
Chaos
as in the war days of those in despair, and an autobiography
of the spectators’ impulse. The actors were tearing up their scripts
and searching for the author among us, we the witnesses
sitting in our seats
I tell my neighbor the artist: Don’t draw your weapon,
and wait, unless you’re the author!
—No
Then he asks me: And you are you the author?
—No
So we sit scared. I say: Be a neutral
hero to escape from an obvious fate
He says: No hero dies revered in the second
scene. I will wait for the rest. Maybe I would
revise one of the acts. And maybe I would mend
what the iron has done to my brothers
So I say: It is you then?
He responds: You and I are two masked authors and two masked
witnesses
I say: How is this my concern? I’m a spectator
He says: No spectators at chasm’s door ... and no
one is neutral here. And you must choose
your part in the end
So I say: I’m missing the beginning, what’s the beginning? 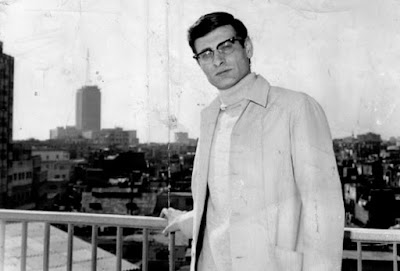 Posted by Anonymous at 9:54 PM