Dancing with Strom by Nikky Finney

I want to tell you, ladies and gentlemen, there’s not enough
troops in the army to force the southern people to break
down segregation and accept the Negro [pronounced Nigra]
into our theatres, into our swimming pools, into our homes,
and into our churches.
—Strom Thurmond, South Carolina
Senator and Presidential Candidate
for the States’ Rights Party, 1948

The youngest has been married off.

He is as tall as Abraham Lincoln. Here, on his
wedding day, he flaunts the high spinning laugh
of a newly freed slave. I stand above him, just
off the second-floor landing, watching
the celebration unfold.

I refuse to leave the porch.

If I walk down I imagine he will extend his
hand, assume I am next in his happy darky line,
#427 on his dance card. His history
and mine, burnt cork and blackboard chalk,
concentric, pancaked, one face, two histories,
slow dragging, doing the nasty.

My father knows all this.

Daddy’s Black Chief Justice legs straddle the boilerplate
carapace of the CSS H. L. Hunley, lost Confederate
submarine, soon to be found just off the coast of
Charleston. He keeps it fully submerged by
applying the weight of every treatise he has
ever written against the death penalty of
South Carolina. Chanting “Briggs v. Elliott,”
he keeps the ironside door of the submarine shut.
No hands.

His eyes are a Black father’s beacon, search-
lights blazing for the married-off sons, and
on the unmarried, whale-eyed nose-in-book
daughter, born unmoored, quiet, yellow,
strategically placed under hospital lights to
fully bake. The one with the most to lose.

There will be no trouble. Still, he chain-
smokes. A burning stick of mint & Indian
leaf seesaws between his lips. He wants
me to remember that trouble is a fire that
runs like a staircase up then down. Even
on a beautiful day in June.

I remember the new research just out:
What the Negro gave America
Chapter 9,206:

Enslaved Africans gifted porches to North
America. Once off the boats they were told,
then made, to build themselves a place—to live.

They build the house that will keep them alive.

Rather than be the bloody human floret on
yet another southern tree, they imagine higher
ground. They build landings with floor enough
to see the trouble coming. Their arced imaginations
nail the necessary out into the floral air. On the
backs and fronts of twentypenny houses,
a watching place is made for the ones who will
come tipping with torch & hog tie through the
quiet woods, hoping to hang them as decoration
in the porcupine hair of longleaf.

Their design will be stolen.
Their wits will outlast gold.
My eyes seek historical rest from the kiss-
kiss theater below; Strom Thurmond’s
it’s-never-too-late-to-forgive-me chivaree.
I search the tops of yellow pine while my
fingers reach, catch, pinch my father’s
determined-to-rise smoke.

Long before AC African people did the
math: how to cool down the hot air of
South Carolina?

If I could descend, without being trotted
out by some roughrider driven by his
submarine dreams, this is what I’d take
my time and scribble into the three-tiered,
white créme wedding cake:

Filibuster. States’ Rights. The Grand Inquisition
of the great Thurgood Marshall. This wedding
reception would not have been possible without
the Civil Rights Act of 1957 (opposed by
you-know-who).

The Dixiecrat senator has not worn his
sandy seersucker fedora to the vows.
The top of Strom Thurmond’s bald head
reveals a birthmark tattooed in contrapposto
pose: Segregation Forever.
All my life he has been the face of hatred;
the blue eyes of the Confederate flag,
the pasty bald of white men pulling wooly
heads up into the dark skirts of trees,
the sharp, slobbering, amber teeth of
German shepherds, still clenched inside
the tissue-thin, (still marching), band-leader
legs of Black schoolteachers, the single-
minded pupae growing between the legs of
white boys crossing the tracks, ready to
force Black girls into fifth-grade positions,
Palmetto state-sanctioned sex 101.

I didn’t want to dance with him.

My young cousin arrives at my elbow.
Her beautiful lips the color of soft-skin
mangoes. She pulls, teasing the stitches
of my satin bridesmaid gown, “You better
go on down there and dance with Strom—
while he still has something left.”

I don’t tell her it is unsouthern for her
to call him by his first name, as if they
are familiar. I don’t tell her: To bear
witness to marriage is to believe that
everything moving through the sweet
wedding air can be confidently, left—
to Love.

I stand on the landing high above the
beginnings of Love, holding a plastic
champagne flute, drinking in the warm
June air of South Carolina. I hear my
youngest brother’s top hat joy. Looking
down I find him, deep in the giddy crowd,
modern, integrated, interpretive.

For ten seconds I consider dancing with
Strom. His Confederate hands touch
every shoulder, finger, back that I love.
I listen to the sound of Black laughter
shimmying. All worry floats beyond
the gurgling submarine bubbles,
the white railing, every drop of
champagne air.

I close my eyes and Uncle Freddie
appears out of a baby’s breath of fog.
(The dead are never porch bound.)
He moves with ease where I cannot.
He walks out on the rice-thrown air,
heaving a lightning bolt instead of
a wave. Suddenly, there is a table set,
complete with 1963 dining room stars,
they twinkle twinkle up & behind him.
Thelonious, Martin, Malcolm, Nina,
Dakota, all mouths Negro wide &
open have come to sing me down.
His tattered almanac sleeps curled like
a wintering slug in his back pocket.
His dark Dogon eyes jet to the scene
below, then zoom past me until they are
lost in the waning sugilite sky. Turning
in the shadows of the wheat fields,
he whispers a truth plucked from
the foreword tucked in his back pocket:
Veritas: Black people will forgive you
quicker than you can say Orangeburg
Massacre.

History does not keep books on the
handiwork of slaves. But the enslaved
who built this Big House, long before
I arrived for this big wedding, knew
the power of a porch.

This native necessity of nailing down
a place, for the cooling off of air,
in order to lift the friendly, the kindly,
the so politely, the in-love-ly, jubilant,
into the arms of the grand peculiar,
for the greater good of
the public spectacular:

us
giving us
away. 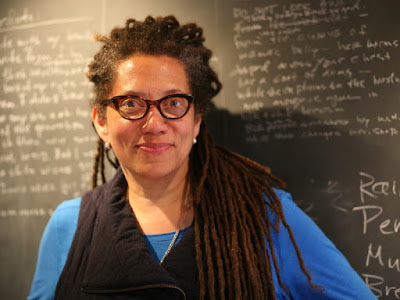 Posted by Anonymous at 8:31 PM