Is it winter again, is it cold again,
didn’t Frank just slip on the ice,
didn’t he heal, weren’t the spring seeds planted

didn’t the scar form, invisible
above the injury

terror and cold,
didn’t they just end, wasn’t the back garden
harrowed and planted–

I remember how the earth felt, red and dense,
in stiff rows, weren’t the seeds planted,
didn’t vines climb the south wall

I can’t hear your voice
for the wind’s cries, whistling over the bare ground

I no longer care
what sound it makes

when I was silenced, when did it first seem
pointless to describe that sound

what it sounds like can’t change what it is–

didn’t the night end, wasn’t the earth
safe when it was planted

didn’t we plant the seeds,
weren’t we necessary to the earth,

the vines, were they harvested?

Summer after summer has ended,
balm after violence:
it does me no good
to be good to me now;
violence has changed me.

Daybreak. The low hills shine
ochre and fire, even the fields shine.
I know what I see; sun that could be
the August sun, returning
everything that was taken away —

You hear this voice? This is my mind’s voice;
you can’t touch my body now.
It has changed once, it has hardened,
don’t ask it to respond again.

A day like a day in summer.
Exceptionally still. The long shadows of the maples
nearly mauve on the gravel paths.
And in the evening, warmth. Night like a night in summer.

It does me no good; violence has changed me.
My body has grown cold like the stripped fields;
now there is only my mind, cautious and wary,
with the sense it is being tested.

Once more, the sun rises as it rose in summer;
bounty, balm after violence.
Balm after the leaves have changed, after the fields
have been harvested and turned.

Snow had fallen. I remember
music from an open window.

Come to me, said the world.
This is not to say
it spoke in exact sentences
but that I perceived beauty in this manner.

Sunrise. A film of moisture
on each living thing. Pools of cold light
formed in the gutters.

I stood
at the doorway,
ridiculous as it now seems.

Winter was over. In the thawed dirt,
bits of green were showing.

Come to me, said the world. I was standing
in my wool coat at a kind of bright portal —
I can finally say
long ago; it gives me considerable pleasure. Beauty
the healer, the teacher —

death cannot harm me
more than you have harmed me,
my beloved life.

The light has changed;
middle C is tuned darker now.
And the songs of morning sound over-rehearsed. —

The songs have changed; the unspeakable
has entered them.

This is the light of autumn, not the light that says
I am reborn.

Not the spring dawn: I strained, I suffered, I was delivered.
This is the present, an allegory of waste.

So much has changed. And still, you are fortunate:
the ideal burns in you like a fever.
Or not like a fever, like a second heart.

The songs have changed, but really they are still quite beautiful.
They have been concentrated in a smaller space, the space of the mind.
They are dark, now, with desolation and anguish.

And yet the notes recur. They hover oddly
in anticipation of silence.
The ear gets used to them.
The eye gets used to disappearances.

You will not be spared, nor will what you love be spared.

A wind has come and gone, taking apart the mind;
it has left in its wake a strange lucidity.

How privileged you are, to be passionately
clinging to what you love;
the forfeit of hope has not destroyed you.

This is the light of autumn; it has turned on us.
Surely it is a privilege to approach the end
still believing in something.

It is true that there is not enough beauty in the world.
It is also true that I am not competent to restore it.
Neither is there candor, and here I may be of some use.

I am
at work, though I am silent.

misery of the world
bounds us on either side, an alley

lined with trees; we are

companions here, not speaking,
each with his own thoughts;

behind the trees, iron
gates of the private houses,
the shuttered rooms

as though it were the artist’s
duty to create
hope, but out of what? what?

the word itself
false, a device to refute
perception—At the intersection,

ornamental lights of the season.

I was young here. Riding
the subway with my small book
as though to defend myself against

you are not alone,
the poem said,
in the dark tunnel.

My friend the earth is bitter; I think
sunlight has failed her.
Bitter or weary, it is hard to say.

Between herself and the sun,
something has ended.
She wants, now, to be left alone;
I think we must give up
turning to her for affirmation.

Above the fields,
above the roofs of the village houses,
the brilliance that made all life possible
becomes the cold stars.

Lie still and watch:
they give nothing but ask nothing.

From within the earth’s
bitter disgrace, coldness and barrenness

my friend the moon rises:
she is beautiful tonight, but when is she not beautiful? 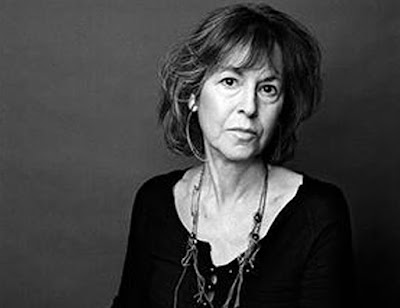