How Can It Be I Am No Longer I

Winter was the ravaging in the scarified
Ghost garden, a freak of letters crossing down a rare

Path bleak with poplars. Only the yew were a crewel
Of kith at the fieldstone wall, annulled

As a dulcimer cinched in a green velvet sack.
To be damaged is to endanger—taut as the stark

Throats of castrati in their choir, lymphless & fawning
& pale. The miraculous conjoining

Where the beamless air harms our self & lung,
Our three-chambered heart & sternum,

Where two made a monstrous
Braid of other, ravishing.

To damage is an animal hunch
& urge, thou fallen—the marvelous much

Is the piece of Pleiades the underworld calls
The nightsky from their mud & rime. Perennials

Ghost the ground & underground the coffled
Veins, an aneurism of the ice & spectacle.

I would not speak again. How flinching
The world will seem—in the lynch

Always love. I was a flint
To bliss & barbarous, a bristling

Of tracks like a starfish carved on his inner arm,
A tindering of tissue, a reliquary, twinned.

In winter when moss sheathes every thing alive
& everything not or once alive.

That I would be—dryadic, gothic, fanatic against
The vanishing; I will not speak to you again. 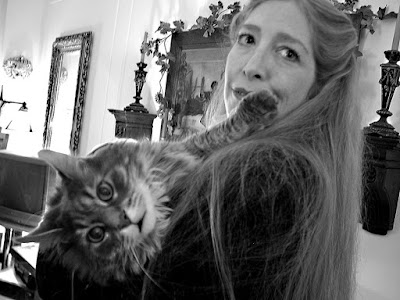 Posted by Anonymous at 6:58 PM