Warm enough here in Patagonia AZ to read
the new Mandelstam outside in my underpants
which is to say he was never warm enough
except in summer and he was without paper to write
and his belly was mostly empty most of the time
like that Mexican girl I picked up on a mountain road
the other day who couldn’t stop weeping. She had slept
out two nights in a sweater in below-freezing weather.
She had been headed to Los Angeles but the coyote
took her money and abandoned her in the wilderness.
Her shoes were in pieces and her feet bleeding.
I took her to town and bought her food. She got a ride
to Nogales. She told us in Spanish that she just wanted
to go home and sleep in her own bed. That’s what Mandelstam
wanted with mother in the kitchen fixing dinner. Everyone
wants this. Mandelstam said, “To be alone is to be alive.”
“Lost and looked in the sky’s asylum eye.” “What of
her nights?” Maybe she was watched by some of the fifty
or so birds I have in the yard now. When they want to
they just fly away. I gave them my yard and lots of food.
They smile strange bird smiles. She couldn’t fly away.
Neither can I though I’ve tried a lot lately to migrate
to the Camargue on my own wings. When they are married,
Mandelstam and the Mexican girl, in heaven they’ll tell
long stories of the horrors of life on earth ending each session
by chanting his beautiful poems that we did not deserve. 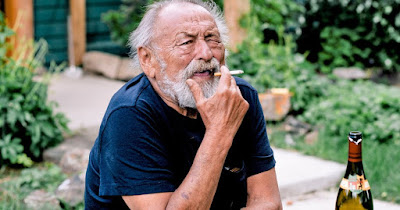