There were packs of dogs to deal with and broomsticks
whacking rubber balls and everyone stopping for
aeroplanes and chasing fire engines
and standing around where sidewalks on hills turned almost
level, and horses and horseshit, and ice in the cellars;
and Saturday I wore a dark suit and leaned
against my pillar and Sunday I put on a necktie
and stood in front of a drugstore eating a Clark bar.
The Fourth of July I stayed in my attic resting in
filthy cardboard and played with my bats, I stretched
their bony wings, and put a burning match
to the bundle of papers, especially to the ropes
that held them together, and read the yellow news
as it went up in smoke and spoke for the fly and raged
against the spider, say what you will, and started
my drive to Camden to look at the house on Mickle Street
and walked—with him—down to the river to skip
some stones, since Ty Cobb did it and Jim Thorpe did it
though it was nothing compared to George Washington
throwing silver dollars, and for our fireworks
we found some brown beer bottles and ran down Third Street
screaming, but he had to go back home and sit
in his rocking chair for there was a crowd of Lithuanians
coming and he was a big hit in Vilnius
the way he sat in his mound of papers and gripped
the arms, though I was tired of Lithuanians
who didn’t know shit, not to mention Romanians,
to pick a country out of a hat—or I was
just tired and Anne Marie was right, I shouldn’t
be driving at night, I should be dead, I don’t
even know how to give instructions, I don’t even know
my rabbi’s name—she and her motorcycle—
imagine them speaking Babylonian over
my shoebox—imagine them throwing flowers—fleabane,
black-eyed Susans, daisies—along with the dirt. 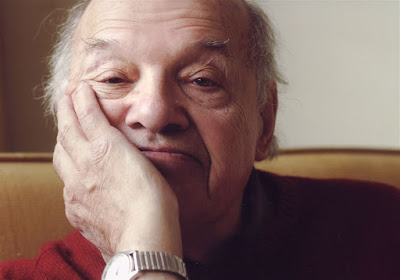 Posted by Anonymous at 8:55 PM