My father was an enormous man
Who believed kindness and lack of size
Were nothing more than sissified
Signs of weakness. Narrow-minded,

His eyes were the worst kind
Of jury—deliberate, distant, hard.
No one could outshout him
Or make bigger fists. The few

Who tried got taken for bad,
Beat down, their bodies slammed.
I wanted to be just like him:
Big man, man of the house, king.

A plagiarist, hitting the things he hit,
I learned to use my hands watching him
Use his, pretending to slap mother
When he slapped mother.

He was sick. A diabetic slept
Like a silent vowel inside his well-built,
Muscular, dark body. Hard as all that
With similar weaknesses

—I discovered writing,
How words are parts of speech
With beats and breaths of their own.
Interjections like flams. Wham! Bam!

An heir to the rhythm
And tension beneath the beatings,
My first attempts were filled with noise,
Wild solos, violent uncontrollable blows.

The page tightened like a drum
Resisting the clockwise twisting
Of a handheld chrome key,
The noisy banging and tuning of growth. 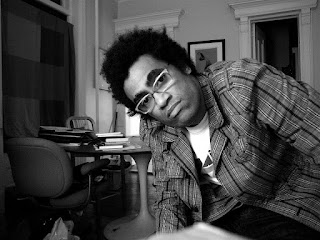