When the light poured down through a hole in the clouds,
We knew the great poet was going to show. And he did.
A limousine with all-white tires and stained-glass windows
Dropped him off. And then, with a clear and soundless fluency,
He strode into the hall. There was a hush. His wings were big.
The cut of his suit, the width of his tie, were out of date.
When he spoke, the air seemed whitened by imagined cries.
The worm of desire bore into the heart of everyone there.
There were tears in their eyes. The great one was better than ever.
“No need to rush,” he said at the close of the reading, “the end
Of the world is only the end of the world as you know it.”
How like him, everyone thought. Then he was gone.
And the world was a blank. It was cold and the air was still.
Tell me, you people out there, what is poetry anyway?
Can anyone die without even a little? 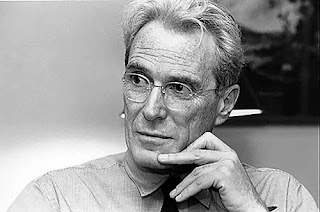