He started out making feluccas;
an Egyptian taught him how.
Then he opened a shop by the beach,

sold ice cream, parasols and chairs.
He asked for my hand when I was
in teacher college, first year.

Time passes like the Ghibli here.
I was 7 months with my third baby
when someone sought him

for a Zodiac. He traveled all the way
to Guangzhou, brought back a dozen,
has been selling them ever since.

One night I asked how strong
they were, how many they carry.
“It’s all in the booklet,” he said,

“no reason for what keeps happening
to them.” He sipped from a glass
of bokha and explained how

from this same jetty, long before
the Arabs and Vandals, even before
the Romans and their famous theater,

boats filled with people and goods
and sailed off. A day or a week later,
the sea sends back the drowned.

His long-lashed eyes closed when
he spoke, his face unchanged by the years.
His fingers moved so carefully

putting out his cigarette. He saw me
looking, nodded, then pulled me toward
his manhood to help him sleep. 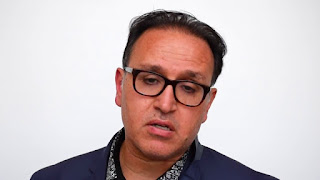