On Patmos, Kneeling in the Panagea by Samuel Green

On Patmos, Kneeling in the Panagea
we hear the sound of a woman’s high-heeled
shoes striking the stones of the floor,
confident stride, strong hips, & I am
back in a hospital bed at Clark Air
Force Base, the Philippines, September,
1969, hearing a pair of shoes tapping their way
down the corridor outside my ward. I’d been
knocked off a motorcycle by a drunk jitney
driver in Cavite City five days before,
left leg shattered, compound fractures,
bone left on the street, flown to the surgeons
at Clark who cleaned, debrided, sutured
& hung me up in traction. There were three
of us in the ward. An air force guy
had blown the fingers off his left hand with a
homemade bomb. He’d been at Cam Ranh Bay
at a party on the beach. Stupid, stupid, he said.
The other guy was army, only seventeen,
right leg gone below the knee, left arm
just above the elbow. Out on a routine
patrol his first week in-country, stood up to pee
& the other newbie, pulling first guard,
shot him. We went through boot together. He spent
his days with a model ship, awkward
as it was to snap the pieces off & glue them into
place one-handed. If I can do this, maybe
I can put myself together again, he said. Each night
after lights out, he cried for an hour, softly,
into the snot on his pillow. The staff shrink was pissed
I wouldn’t say yes to amputation, said
I was immature. By that time I was hooked
on Demerol, my butt cheeks already bared
at the stroke of each third hour, ready
for the needle. End of that week,
late, they wheeled in three gurneys, jammed
them tight against the walls, woke
us up. One held an army captain, left leg just
a stump. He was hyper. Twitchy. Talked
a nurse into a telephone, called his wife. I’m fine,
sweetheart, just fine. I’m coming home, voice cracked.
He didn’t mention the leg. Second guy was nothing
but plaster & gauze, both arms in casts, slits
at eyes & mouth. He didn’t move, didn’t make
a noise. Third man didn’t have any sheets
over him, only a gown. Both legs gone, left arm missing
nearly to the shoulder, rubber tubes in both
nostrils, a pair of IV bags hung on posts
from either side of the gurney. His mouth
was open, eyes glazed. He made a sound like a pair
of house slippers shuffling across a bare
carpet. His catheter bag was half full.
One of the volunteers came in the door
just as the orderlies left. They were officers’ wives
for the most part, helping out while their
husbands flew supply runs or medevacs, stabilized
patients, wrote long, exacting reports. The war
was far away, except for the wards. They fetched us
decks of cards, looked for paperbacks,
helped us fill out daily menus, poured out
cups of water, let us flirt a bit, ignored our looks
of lust. This one looked tired. She talked with
the captain, who still seemed buzzed, his hands
fluttering like bats. His stump thumped up
& down as he talked. His top sheet was stained
brown. He kept repeating home, home, home. I heard her
say the plane would load & leave real early, he
should try to sleep. She put a hand on his
forehead. He settled, closed his eyes. She
moved on to the gauze man, but didn’t do much
more than stand. She reached a hand as though
to touch, but stopped, adjusted the edge of a sheet
& turned away. She murmured something low
to the third soldier, put her ear down near
his face & nodded. She took a cup of ice
from a stand, carefully placed a chip between
his lips & let it melt. She did it twice
more. Anything I can get you, soldier? Her voice
was soft. He made a groan, like
a rusted nut coming loose on a bolt. Yeah,
he said, I want some cake, a chocolate cake.
She watched as water dribbled down his neck, said
What? He said it again. She shook her head.
I’m sorry, she said, but you can’t eat. She tried to give him
one more piece of ice. Lady, he said,

Jesus, lady, I don’t wanna eat it. I just wanna look
at it. He clamped his teeth down hard
grinding away at pain, turned his head to
the wall. A minute more, she left the ward,
gone for the night. Then it was another shot
for me, lights out again & sleep. They came
before breakfast, the nurses, changing linen,
bags, IVs, a single bed pan. The same
orderlies took the captain first. He waved
at us when he left. Then they took the white
ghost who never moved or spoke. That was when
we heard the click of high heels out
in the hall & the volunteer walked in, dressed
for a date, strapless bright green gown,
blonde hair hanging over bare shoulders. She was
carrying a cake in two hands, a big round
three-layer cake, a single candle lit. She walked to
the soldier’s gurney & stopped. He heard
her coming & turned to look: the froth of chocolate
same color as his skin. They didn’t say a word.
The orderlies returned. One checked the blood
pressure in his remaining arm; one
changed the flow on both IVs. The soldier
raised the stump of his arm, let it down
soft on the rumpled sheet. His nose & eyes
were leaking. The orderlies released
the gurney’s brake & wheeled him out. She took
a few steps back to let them pass.
We saw her shoulders shake. She stayed like that
a long, long time, then turned & left
without speaking. The candle had gone out,
left a trail of smoke, like a fighter jet
leaves across a clear sky. The guy who blew off
his own hand said, She could have left us
some. But it was all right. We couldn’t have eaten
the smallest bite of that darkness,
as here, on a Greek island thousands of miles
& more than forty years away,
I wait for the bread of the body, kneeling
beside a woman who feeds me every day. 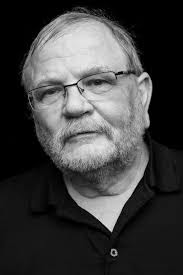