Before You Cut Loose by Simon Armitage

Before You Cut Loose,

put dogs on the list
of difficult things to lose. Those dogs ditched
on the North York Moors or the Sussex Downs
or hurled like bags of sand from rented cars
have followed their noses to market towns
and bounced like balls into their owners’ arms.
I heard one story of a dog that swam
to the English coast from the Isle of Man,
and a dog that carried eggs and bacon
and a morning paper from the village
surfaced umpteen leagues and two years later,
bacon eaten but the eggs unbroken,
newsprint dry as tinder, to the letter.
A dog might wander the width of the map
to bury its head in its owner’s lap,
crawl the last mile to dab a bleeding paw
against its own front door. To die at home,
a dog might walk its four legs to the bone.
You can take off the tag and the collar
but a dog wears one coat and one colour.
A dog got rid of—that’s a dog for life.
No dog howls like a dog kicked out at night.
Try looking a dog like that in the eye. 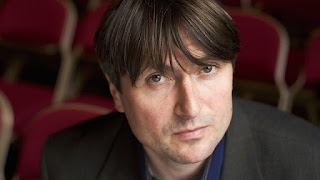