Psychoanalysis: An Elegy by Jack Spicer

Psychoanalysis: An Elegy
What are you thinking about?
I am thinking of an early summer.
I am thinking of wet hills in the rain
Pouring water. Shedding it
Down empty acres of oak and manzanita
Down to the old green brush tangled in the sun,
Greasewood, sage, and spring mustard.
Or the hot wind coming down from Santa Ana
Driving the hills crazy,
A fast wind with a bit of dust in it
Bruising everything and making the seed sweet.
Or down in the city where the peach trees
Are awkward as young horses,
And there are kites caught on the wires
Up above the street lamps,
And the storm drains are all choked with dead branches.
What are you thinking?
I think that I would like to write a poem that is slow as a summer
As slow getting started
As 4th of July somewhere around the middle of the second stanza
After a lot of unusual rain
California seems long in the summer.
I would like to write a poem as long as California
And as slow as a summer.
Do you get me, Doctor? It would have to be as slow
As the very tip of summer.
As slow as the summer seems
On a hot day drinking beer outside Riverside
Or standing in the middle of a white-hot road
Between Bakersfield and Hell
Waiting for Santa Claus.
What are you thinking now?
I’m thinking that she is very much like California.
When she is still her dress is like a roadmap. Highways
Traveling up and down her skin
Long empty highways
With the moon chasing jackrabbits across them
On hot summer nights.
I am thinking that her body could be California
And I a rich Eastern tourist
Lost somewhere between Hell and Texas
Looking at a map of a long, wet, dancing California
That I have never seen.
Send me some penny picture-postcards, lady,
Send them.
One of each breast photographed looking
Like curious national monuments,
One of your body sweeping like a three-lane highway
Twenty-seven miles from a night’s lodging
In the world’s oldest hotel.
What are you thinking?
I am thinking of how many times this poem
Will be repeated. How many summers
Will torture California
Until the damned maps burn
Until the mad cartographer
Falls to the ground and possesses
The sweet thick earth from which he has been hiding.
What are you thinking now?
I am thinking that a poem could go on forever. 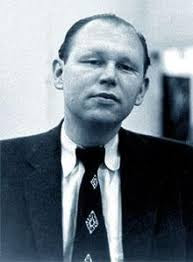