And One For My Dame by Anne Sexton

And One For My Dame

A born salesman,
my father made all his dough
by selling wool to Fieldcrest, Woolrich and Faribo.

A born talker,
he could sell one hundred wet-down bales
of that white stuff. He could clock the miles and the sales

and make it pay.
At home each sentence he would utter
had first pleased the buyer who'd paid him off in butter.

Each word
had been tried over and over, at any rate,
on the man who was sold by the man who filled my plate.

My father hovered
over the Yorkshire pudding and the beef:
a peddler, a hawker, a merchant and an Indian chief.

Roosevelt! Willkie! and war!
How suddenly gauche I was
with my old-maid heart and my funny teenage applause.

Each night at home
my father was in love with maps
while the radio fought its battles with Nazis and Japs.

Except when he hid
in his bedroom on a three-day drunk,
he typed out complex itineraries, packed his trunk,

his matched luggage
and pocketed a confirmed reservation,
his heart already pushing over the red routes of the nation.

I sit at my desk
each night with no place to go,
opening thee wrinkled maps of Milwaukee and Buffalo,

the whole U.S.,
its cemeteries, its arbitrary time zones,
through routes like small veins, capitals like small stones.

He died on the road,
his heart pushed from neck to back,
his white hanky signaling from the window of the Cadillac.

My husband,
as blue-eyed as a picture book, sells wool:
boxes of card waste, laps and rovings he can pull

to the thread
and say Leicester, Rambouillet, Merino,
a half-blood, it's greasy and thick, yellow as old snow.

And when you drive off, my darling,
Yes, sir! Yes, sir! It's one for my dame,
your sample cases branded with my father's name,

your itinerary open,
its tolls ticking and greedy,
its highways built up like new loves, raw and speedy. 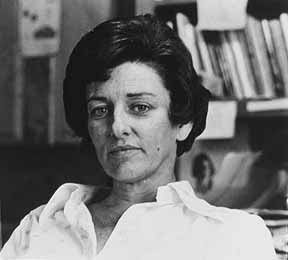 Posted by Anonymous at 9:18 AM