The Albatross by Charles Baudelaire (Original and translations)

Often, for pastime, mariners will ensnare
The albatross, that vast sea-bird who sweeps
On high companionable pinion where
Their vessel glides upon the bitter deeps.

Torn from him native space, this captive king
Flounders upon the deck in stricken pride
And pitiably lets his great white wing
Drag like a heavy paddle at his side.

This rider of winds, how awkward he is, and how weak!
How droll he seems, who lately was all grace!
A sailor pokes a pipestem into his beak;
Another, hobbling, mocks his trammeled pace.

The Poet is like this monarch of the clouds,
Familiar of storms, of stars, and of all high things;
Exiled on earth among its hooting crowds,
He cannot walk, borne down by his giant wings.

Often, to amuse themselves, the men of a crew
Catch albatrosses, those vast sea birds
That indolently follow a ship
As it glides over the deep, briny sea.

Scarcely have they placed them on the deck
Than these kings of the sky, clumsy, ashamed,
Pathetically let their great white wings
Drag beside them like oars.

That winged voyager, how weak and gauche he is,
So beautiful before, now comic and ugly!
One man worries his beak with a stubby clay pipe;
Another limps, mimics the cripple who once flew!

The poet resembles this prince of cloud and sky
Who frequents the tempest and laughs at the bowman;
When exiled on the earth, the butt of hoots and jeers,
His giant wings prevent him from walking.

Sometimes for sport the men of loafing crews
Snare the great albatrosses of the deep,
The indolent companions of their cruise
As through the bitter vastitudes they sweep.

Scarce have they fished aboard these airy kings
When helpless on such unaccustomed floors,
They piteously droop their huge white wings
And trail them at their sides like drifting oars.

How comical, how ugly, and how meek
Appears this soarer of celestial snows!
One, with his pipe, teases the golden beak,
One, limping, mocks the cripple as he goes.

The Poet, like this monarch of the clouds,
Despising archers, rides the storm elate.
But, stranded on the earth to jeering crowds,
The great wings of the giant baulk his gait.

— Roy Campbell
Sometimes, to entertain themselves, the men of the crew
Lure upon deck an unlucky albatross, one of those vast
Birds of the sea that follow unwearied the voyage through,
Flying in slow and elegant circles above the mast.

No sooner have they disentangled him from their nets
Than this aerial colossus, shorn of his pride,
Goes hobbling pitiably across the planks and lets
His great wings hang like heavy, useless oars at his side.

How droll is the poor floundering creature, how limp and weak —
He, but a moment past so lordly, flying in state!
They tease him: One of them tries to stick a pipe in his beak;
Another mimics with laughter his odd lurching gait.

The Poet is like that wild inheritor of the cloud,
A rider of storms, above the range of arrows and slings;
Exiled on earth, at bay amid the jeering crowd,
He cannot walk for his unmanageable wings.

— George Dillon
Often our sailors, for an hour of fun,
Catch albatrosses on the after breeze
Through which these trail the ship from sun to sun
As it skims down the deep and briny seas.

Scarce have these birds been set upon the poop,
Than, awkward now, they, the sky's emperors,
Piteous and shamed, let their great white wings droop
Beside them like a pair of idle oars.

These wingèd voyagers, how gauche their gait!
Once noble, now how ludicrous to view!
One sailor bums them with his pipe, his mate
Limps, mimicking these cripples who once flew.

Poets are like these lords of sky and cloud,
Who ride the storm and mock the bow's taut strings,
Exiled on earth amid a jeering crowd,
Prisoned and palsied by their giant wings.

— Jacques LeClercq,
Often, to amuse themselves, the men of the crew
Catch those great birds of the seas, the albatrosses,
lazy companions of the voyage, who follow
The ship that slips through bitter gulfs.

Hardly have they put them on the deck,
Than these kings of the skies, awkward and ashamed,
Piteously let their great white wings
Draggle like oars beside them.

This winged traveler, how weak he becomes and slack!
He who of late was so beautiful, how comical and ugly!
Someone teases his beak with a branding iron,
Another mimics, limping, the crippled flyer!

The Poet is like the prince of the clouds,
Haunting the tempest and laughing at the archer;
Exiled on earth amongst the shouting people,
His giant's wings hinder him from walking. 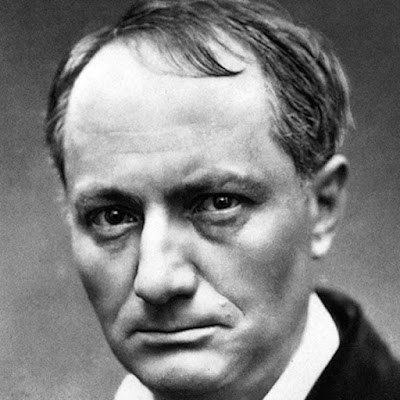 Posted by Anonymous at 6:59 AM