The Clerk’s Tale by Spencer Reece

I am thirty-three and working in an expensive clothier,
selling suits to men I call "Sir."
These men are muscled, groomed and cropped—
with wives and families that grow exponentially.
Mostly I talk of rep ties and bow ties,
of full-Windsor knots and half-Windsor knots,
of tattersall, French cuff, and English spread collars,
of foulards, neats, and internationals,
of pincord, houndstooth, nailhead, and sharkskin.
I often wear a blue pin-striped suit.
My hair recedes and is going gray at the temples.
On my cheeks there are a few pimples.
For my terrible eyesight, horn-rimmed spectacles.
One of my fellow-workers is an old homosexual
who works hard and wears bracelets with jewels.
No one can rival his commission checks.
On his break he smokes a Benson & Hedges cigarette,
puffing expectantly as a Hollywood starlet.
He has carefully applied a layer of Clinique bronzer
to enhance the tan on his face and neck.
His hair is gone except for a few strands
which are combed across his scalp.
He examines his manicured lacquered nails.
I admire his studied attention to details:
his tie stuck to his shirt with masking tape,
his teeth capped, his breath mint in place.
The old homosexual and I laugh in the back
over a coarse joke involving an octopus.
Our banter is staccato, staged and close
like those "Spanish Dances" by Granados.
I sometimes feel we are in a musical—
gossiping backstage between our numbers.
He drags deeply on his cigarette.
Most of his life is over.
Often he refers to himself as "an old faggot."
He does this bemusedly, yet timidly.
I know why he does this.
He does this because his acceptance is finally complete—
and complete acceptance is always
bittersweet. Our hours are long. Our backs bent.
We are more gracious than English royalty.
We dart amongst the aisles tall as hedgerows.
Watch us face into the merchandise.
How we set up and take apart mannequins
as if we were performing autopsies.
A naked body, without pretense, is of no use.
It grows late.
I hear the front metal gate close down.
We begin folding the ties correctly according to color.
The shirts--Oxfords, broadcloths, pinpoints—
must be sized, stacked, or rehashed.
The old homosexual removes his right shoe,
allowing his gigantic bunion to swell.
There is the sound of cash being counted—
coins clinking, bills swishing, numbers whispered—
One, two, three, four, five, six, seven. . .
We are changed when the transactions are done—
older, dirtier, dwarfed.
A few late customers gawk in at us.
We say nothing. Our silence will not be breached.
The lights go off, one by one—
the dressing room lights, the mirror lights.
Then it is very late. How late? Eleven?
We move to the gate. It goes up.
The gate's grating checkers our cheeks.
This is the Mall of America.
The light is bright and artificial,
yet not dissimilar to that found in a Gothic cathedral.
You must travel down the long hallways to the exits
before you encounter natural light.
One final formality: the manager checks our bags.
The old homosexual reaches into his over-the-shoulder leather bag—
the one he bought on his European travels
with his companion of many years.
He finds a stick of lip balm and applies it to his lips
liberally, as if shellacking them.
Then he inserts one last breath mint
and offers one to me. The gesture is fraternal
and occurs between us many times.
At last, we bid each other good night.
I watch him fade into the many-tiered parking lot,
where the thousands of cars have come
and are now gone. This is how our day ends.
This is how our day always ends.
Sometimes snow falls like rice.
See us take to our dimly lit exits,
disappearing into the cities of Minneapolis and St. Paul;
Minneapolis is sleek and St. Paul,
named after the man who had to be shown,
is smaller, older, and somewhat withdrawn.
Behind us, the moon pauses over the vast egg-like dome of the mall.
See us loosening our ties among you.
We are alone.
There is no longer any need to express ourselves. 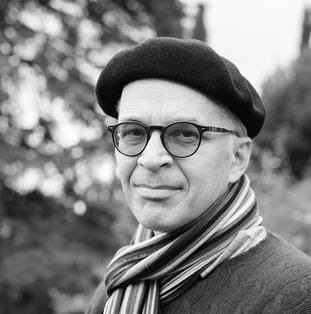