The World As Meditation by Wallace Stevens

The World As Meditation

Is it Ulysses that approaches from the east,
The interminable adventurer? The trees are mended.
That winter is washed away. Someone is moving

On the horizon and lifting himself up above it.
A form of fire approaches the cretonnes of Penelope,
Whose mere savage presence awakens the world in which she dwells.

She has composed, so long, a self with which to welcome him,
Companion to his self for her, which she imagined,
Two in a deep-founded sheltering, friend and dear friend.

The trees had been mended, as an essential exercise
In an inhuman meditation, larger than her own.
No winds like dogs watched over her at night.

She wanted nothing he could not bring her by coming alone.
She wanted no fetchings. His arms would be her necklace
And her belt, the final fortune of their desire.

But was it Ulysses? Or was it only the warmth of the sun
On her pillow? The thought kept beating in her like her heart.
The two kept beating together. It was only day.

It was Ulysses and it was not. Yet they had met,
Friend and dear friend and a planet’s encouragement.
The barbarous strength within her would never fail.

She would talk a little to herself as she combed her hair,
Repeating his name with its patient syllables,
Never forgetting him that kept coming constantly so near. 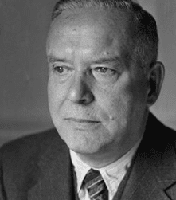 Posted by Anonymous at 9:40 PM