Friends, will you bear with me today,
for I have awakened
from a dream in which a robin
made with its shabby wings a kind of veil
behind which it shimmied and stomped something from the south
of Spain, its breast aflare,
looking me dead in the eye
from the branch that grew into my window,
coochie-cooing my chin,
the bird shuffling its little talons left, then right,
while the leaves bristled
against the plaster wall, two of them drifting
onto my blanket while the bird
opened and closed its wings like a matador
giving up on murder,
jutting its beak, turning a circle,
and flashing, again,
the ruddy bombast of its breast
by which I knew upon waking
it was telling me
in no uncertain terms
to bellow forth the tubas and sousaphones,
the whole rusty brass band of gratitude
not quite dormant in my belly—
it said so in a human voice,
“Bellow forth”—
and who among us could ignore such odd
and precise counsel?

Hear ye! hear ye! I am here
to holler that I have hauled tons—by which I don’t mean lots,
I mean tons — of cowshit
and stood ankle deep in swales of maggots
swirling the spent beer grains
the brewery man was good enough to dump off
holding his nose, for they smell very bad,
but make the compost writhe giddy and lick its lips,
twirling dung with my pitchfork
again and again
with hundreds and hundreds of other people,
we dreamt an orchard this way,
furrowing our brows,
and hauling our wheelbarrows,
and sweating through our shirts,
and two years later there was a party
at which trees were sunk into the well-fed earth,
one of which, a liberty apple, after being watered in
was tamped by a baby barefoot
with a bow hanging in her hair
biting her lip in her joyous work
and friends this is the realest place I know,
it makes me squirm like a worm I am so grateful,
you could ride your bike there
or roller skate or catch the bus
there is a fence and a gate twisted by hand,
there is a fig tree taller than you in Indiana,
it will make you gasp.
It might make you want to stay alive even, thank you;

and thank you
for not taking my pal when the engine
of his mind dragged him
to swig fistfuls of Xanax and a bottle or two of booze,
and thank you for taking my father
a few years after his own father went down thank you
mercy, mercy, thank you
for not smoking meth with your mother
oh thank you thank you
for leaving and for coming back,
and thank you for what inside my friends’
love bursts like a throng of roadside goldenrod
gleaming into the world,
likely hauling a shovel with her
like one named Aralee ought,
with hands big as a horse’s,
and who, like one named Aralee ought,
will laugh time to time til the juice
runs from her nose; oh
thank you
for the way a small thing’s wail makes
the milk or what once was milk
in us gather into horses
huckle-buckling across a field;

and thank you, friends, when last spring
the hyacinth bells rang
and the crocuses flaunted
their upturned skirts, and a quiet roved
the beehive which when I entered
were snugged two or three dead
fist-sized clutches of bees between the frames,
almost clinging to one another,
this one’s tiny head pushed
into another’s tiny wing,
one’s forelegs resting on another’s face,
the translucent paper of their wings fluttering
beneath my breath and when
a few dropped to the frames beneath:
honey; and after falling down to cry,
everything’s glacial shine.

And thank you, too. And thanks
for the corduroy couch I have put you on.
Put your feet up. Here’s a light blanket,
a pillow, dear one,
for I can feel this is going to be long.
I can’t stop
my gratitude, which includes, dear reader,
you, for staying here with me,
for moving your lips just so as I speak.
Here is a cup of tea. I have spooned honey into it.

And thank you the tiny bee’s shadow
perusing these words as I write them.
And the way my love talks quietly
when in the hive,
so quietly, in fact, you cannot hear her
but only notice barely her lips moving
in conversation. Thank you what does not scare her
in me, but makes her reach my way. Thank you the love
she is which hurts sometimes. And the time
she misremembered elephants
in one of my poems which, oh, here
they come, garlanded with morning glory and wisteria
blooms, trombones all the way down to the river.
Thank you the quiet
in which the river bends around the elephant’s
solemn trunk, polishing stones, floating
on its gentle back
the flock of geese flying overhead.

And to the quick and gentle flocking
of men to the old lady falling down
on the corner of Fairmount and 18th, holding patiently
with the softest parts of their hands
her cane and purple hat,
gathering for her the contents of her purse
and touching her shoulder and elbow;
thank you the cockeyed court
on which in a half-court 3 vs. 3 we oldheads
made of some runny-nosed kids
a shambles, and the 61-year-old
after flipping a reverse lay-up off a back door cut
from my no-look pass to seal the game
ripped off his shirt and threw punches at the gods
and hollered at the kids to admire the pacemaker’s scar
grinning across his chest; thank you
the glad accordion’s wheeze
in the chest; thank you the bagpipes.

Thank you to the woman barefoot in a gaudy dress
for stopping her car in the middle of the road
and the tractor trailer behind her, and the van behind it,
whisking a turtle off the road.
Thank you god of gaudy.
Thank you paisley panties.
Thank you the organ up my dress.
Thank you the sheer dress you wore kneeling in my dream
at the creek’s edge and the light
swimming through it. The koi kissing
halos into the glassy air.
The room in my mind with the blinds drawn
where we nearly injure each other
crawling into the shawl of the other’s body.
Thank you for saying it plain:
fuck each other dumb.

And you, again, you, for the true kindness
it has been for you to remain awake
with me like this, nodding time to time
and making that noise which I take to mean
yes, or, I understand, or, please go on
but not too long, or, why are you spitting
so much, or, easy Tiger
hands to yourself. I am excitable.
I am sorry. I am grateful.
I just want us to be friends now, forever.
Take this bowl of blackberries from the garden.
The sun has made them warm.
I picked them just for you. I promise
I will try to stay on my side of the couch.

And thank you the baggie of dreadlocks I found in a drawer
while washing and folding the clothes of our murdered friend;
the photo in which his arm slung
around the sign to “the trail of silences”; thank you
the way before he died he held
his hands open to us; for coming back
in a waft of incense or in the shape of a boy
in another city looking
from between his mother’s legs,
or disappearing into the stacks after brushing by;
for moseying back in dreams where,
seeing us lost and scared
he put his hand on our shoulders
and pointed us to the temple across town;

and thank you to the man all night long
hosing a mist on his early-bloomed
peach tree so that the hard frost
not waste the crop, the ice
in his beard and the ghosts
lifting from him when the warming sun
told him sleep now; thank you
the ancestor who loved you
before she knew you
by smuggling seeds into her braid for the long
journey, who loved you
before he knew you by putting
a walnut tree in the ground, who loved you
before she knew you by not slaughtering
the land; thank you
who did not bulldoze the ancient grove
of dates and olives,
who sailed his keys into the ocean
and walked softly home; who did not fire, who did not
plunge the head into the toilet, who said stop,
don’t do that; who lifted some broken
someone up; who volunteered
the way a plant birthed of the reseeding plant
is called a volunteer, like the plum tree
that marched beside the raised bed
in my garden, like the arugula that marched
itself between the blueberries,
nary a bayonet, nary an army, nary a nation,
which usage of the word volunteer
familiar to gardeners the wide world
made my pal shout “Oh!” and dance
and plunge his knuckles
into the lush soil before gobbling two strawberries
and digging a song from his guitar
made of wood from a tree someone planted, thank you;

thank you zinnia, and gooseberry, rudbeckia
and pawpaw, Ashmead’s kernel, cockscomb
and scarlet runner, feverfew and lemonbalm;
thank you knitbone and sweetgrass and sunchoke
and false indigo whose petals stammered apart
by bumblebees good lord please give me a minute...
and moonglow and catkin and crookneck
and painted tongue and seedpod and johnny jump-up;
thank you what in us rackets glad
what gladrackets us;

and thank you, too, this knuckleheaded heart, this pelican heart,
this gap-toothed heart flinging open its gaudy maw
to the sky, oh clumsy, oh bumblefucked,
oh giddy, oh dumbstruck,
oh rickshaw, oh goat twisting
its head at me from my peach tree’s highest branch,
balanced impossibly gobbling the last fruit,
its tongue working like an engine,
a lone sweet drop tumbling by some miracle
into my mouth like the smell of someone I’ve loved;
heart like an elephant screaming
at the bones of its dead;
heart like the lady on the bus
dressed head to toe in gold, the sun
shivering her shiny boots, singing
Erykah Badu to herself
leaning her head against the window;

and thank you the way my father one time came back in a dream
by plucking the two cables beneath my chin
like a bass fiddle’s strings
and played me until I woke singing,
no kidding, singing, smiling,
thank you, thank you,
stumbling into the garden where
the Juneberry’s flowers had burst open
like the bells of French horns, the lily
my mother and I planted oozed into the air,
the bazillion ants labored in their earthen workshops
below, the collard greens waved in the wind
like the sails of ships, and the wasps
swam in the mint bloom’s viscous swill;

and you, again you, for hanging tight, dear friend.
I know I can be long-winded sometimes.
I want so badly to rub the sponge of gratitude
over every last thing, including you, which, yes, awkward,
the suds in your ear and armpit, the little sparkling gems
slipping into your eye. Soon it will be over,

which is precisely what the child in my dream said,
holding my hand, pointing at the roiling sea and the sky
hurtling our way like so many buffalo,
who said it’s much worse than we think,
and sooner; to whom I said
no duh child in my dreams, what do you think
this singing and shuddering is,
what this screaming and reaching and dancing
and crying is, other than loving
what every second goes away?
Goodbye, I mean to say.
And thank you. Every day. 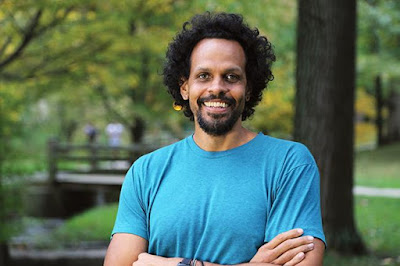 Posted by Anonymous at 6:25 PM