Bringing the Shovel Down by Ross Gay

Bringing the Shovel Down
Because I love you, and beneath the uncountable stars
I have become the delicate piston threading itself through your chest,
I want to tell you a story I shouldn’t but will, and in the meantime neglect, Love,
the discordant melody spilling from my ears but attend,
instead, to this tale, for a river burns inside my mouth
and it wants both purgation and to eternally sip your thousand drippings;
and in the story is a dog and unnamed it leads to less heartbreak,
so name him Max, and in the story are neighborhood kids
who spin a yarn about Max like I’m singing to you, except they tell a child,
a boy who only moments earlier had been wending through sticker bushes
to pick juicy rubies, whose chin was, in fact, stained with them,
and combining in their story the big kids make
the boy who shall remain unnamed believe Max to be sick and rabid,
and say his limp and regular smell of piss are just two signs,
but the worst of it, they say, is that he’ll likely find you in the night,
and the big kids do not giggle, and the boy does not giggle,
but lets the final berries in his hand drop into the overgrowth
at his feet, and if I spoke the dream of the unnamed boy
I fear my tongue would turn an arm of fire so I won’t, but
know inside the boy’s head grew a fire beneath the same stars
as you and I, Love, your leg between mine, the fine hairs
on your upper thigh nearly glistening in the night, and the boy,
the night, the incalculable mysteries as he sleeps with a stuffed animal
tucked beneath his chin and rolls tight against his brother
in their shared bed, who rolls away, and you know by now
there is no salve to quell his mind’s roaring machinery
and I shouldn’t tell you, but I will,
the unnamed boy
on the third night of the dreams which harden his soft face
puts on pants and a sweatshirt and quietly takes the spade from the den
and more quietly leaves his house where upstairs his father lies dreamless,
and his mother bends her body into his,
and beneath these same stars, Love, which often, when I study them,
seem to recede like so many of the lies of light,
the boy walks to the yard where Max lives attached to a steel cable
spanning the lawn, and the boy brings hot dogs which he learned
from Tom & Jerry, and nearly urinating in his pants he tosses them
toward the quiet and crippled thing limping across the lawn,
the cable whispering above the dew-slick grass, and Max whimpers,
and the boy sees a wolf where stands this ratty
and sad and groveling dog and beneath these very stars
the boy brings the shovel down
until Max’s hind legs stop twitching and his left ear folds into itself,
and the unnamed boy stares at the rabid wolf whose wild eyes loll white in his head,
taking slow steps backward through the wet grass and feels,
for the first time in days, the breath in his lungs, which is cool,
and a little damp, spilling over his small lips, and he feels,
again, his feet beneath him, and the earth beneath them, and starlings
singing the morning in, and the somber movement of beetles
chewing the leaves of the white birch, glinting in the dark, and he notices,
Darling, an upturned nest beneath the tree, and flips it looking for the blue eggs
of robins, but finds none, and placing a rumpled crimson feather in his mouth
slips the spindly thicket into another tree, which he climbs
to watch the first hint of light glancing above the fields, and the boy
eventually returns to his thorny fruit bush where an occasional prick
leaves on his arm or leg a spot of blood the color of these raspberries
and tasting of salt, and filling his upturned shirt with them he beams
that he could pull from the earth that which might make you smile,
Love, which you’ll find in the fridge, on the bottom shelf, behind the milk,
in the bowl you made with your own lovely hands. 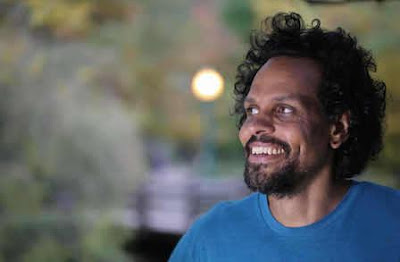