I Invite My Parents to a Dinner Party by Chen Chen

about him. You will enjoy dinner. You will be
enjoyable. Please RSVP.
They RSVP. They come.
They sit at the table & ask my boyfriend
the first of the conversation starters I slip them
upon arrival: How is work going?
I’m like the kid in Home Alone, orchestrating
every movement of a proper family, as if a pair
of scary yet deeply incompetent burglars
is watching from the outside.
My boyfriend responds in his chipper way.
I pass my father a bowl of fish ball soup—So comforting,

isn’t it? My mother smiles her best
Sitting with Her Son’s Boyfriend
Who Is a Boy Smile. I smile my Hurray for Doing
a Little Better Smile.
Everyone eats soup.
Then, my mother turns
to me, whispers in Mandarin, Is he coming with you
for Thanksgiving? My good friend is & she wouldn’t like

this. I’m like the kid in Home Alone, pulling
on the string that makes my cardboard mother
more motherly, except she is
not cardboard, she is
already, exceedingly my mother. Waiting
for my answer.
While my father opens up
a Boston Globe, when the invitation
clearly stated: No security
blankets. I’m like the kid
in Home Alone, except the home
is my apartment, & I’m much older, & not alone,
& not the one who needs
to learn, has to—Remind me

what’s in that recipe again, my boyfriend says
to my mother, as though they have always, easily
talked. As though no one has told him
many times, what a nonlinear slapstick meets
slasher flick meets psychological
pit he is now co-starring in.
Remind me, he says
to our family. 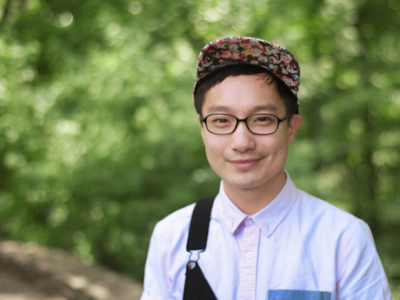 Posted by Anonymous at 8:58 PM