Syringa
Orpheus liked the glad personal quality
Of the things beneath the sky. Of course, Eurydice was a part
Of this. Then one day, everything changed. He rends
Rocks into fissures with lament. Gullies, hummocks
Can’t withstand it. The sky shudders from one horizon
To the other, almost ready to give up wholeness.
Then Apollo quietly told him: “Leave it all on earth.
Your lute, what point? Why pick at a dull pavan few care to
Follow, except a few birds of dusty feather,
Not vivid performances of the past.” But why not?
All other things must change too.
The seasons are no longer what they once were,
But it is the nature of things to be seen only once,
As they happen along, bumping into other things, getting along
Somehow. That’s where Orpheus made his mistake.
Of course Eurydice vanished into the shade;
She would have even if he hadn’t turned around.
No use standing there like a gray stone toga as the whole wheel
Of recorded history flashes past, struck dumb, unable to utter an intelligent
Comment on the most thought-provoking element in its train.
Only love stays on the brain, and something these people,
These other ones, call life. Singing accurately
So that the notes mount straight up out of the well of
Dim noon and rival the tiny, sparkling yellow flowers
Growing around the brink of the quarry, encapsulates
The different weights of the things.
But it isn’t enough
To just go on singing. Orpheus realized this
And didn’t mind so much about his reward being in heaven
After the Bacchantes had torn him apart, driven
Half out of their minds by his music, what it was doing to them.
Some say it was for his treatment of Eurydice.
But probably the music had more to do with it, and
The way music passes, emblematic
Of life and how you cannot isolate a note of it
And say it is good or bad. You must
Wait till it’s over. “The end crowns all,”
Meaning also that the “tableau”
Is wrong. For although memories, of a season, for example,
Melt into a single snapshot, one cannot guard, treasure
That stalled moment. It too is flowing, fleeting;
It is a picture of flowing, scenery, though living, mortal,
Over which an abstract action is laid out in blunt,
Harsh strokes. And to ask more than this
Is to become the tossing reeds of that slow,
Powerful stream, the trailing grasses
Playfully tugged at, but to participate in the action
No more than this. Then in the lowering gentian sky
Electric twitches are faintly apparent first, then burst forth
Into a shower of fixed, cream-colored flares. The horses
Have each seen a share of the truth, though each thinks,
“I’m a maverick. Nothing of this is happening to me,
Though I can understand the language of birds, and
The itinerary of the lights caught in the storm is fully apparent to me.
Their jousting ends in music much
As trees move more easily in the wind after a summer storm
And is happening in lacy shadows of shore-trees, now, day after day.”
But how late to be regretting all this, even
Bearing in mind that regrets are always late, too late!
To which Orpheus, a bluish cloud with white contours,
Replies that these are of course not regrets at all,
Merely a careful, scholarly setting down of
Unquestioned facts, a record of pebbles along the way.
And no matter how all this disappeared,
Or got where it was going, it is no longer
Material for a poem. Its subject
Matters too much, and not enough, standing there helplessly
While the poem streaked by, its tail afire, a bad
Comet screaming hate and disaster, but so turned inward
That the meaning, good or other, can never
Become known. The singer thinks
Constructively, builds up his chant in progressive stages
Like a skyscraper, but at the last minute turns away.
The song is engulfed in an instant in blackness
Which must in turn flood the whole continent
With blackness, for it cannot see. The singer
Must then pass out of sight, not even relieved
Of the evil burthen of the words. Stellification
Is for the few, and comes about much later
When all record of these people and their lives
Has disappeared into libraries, onto microfilm.
A few are still interested in them. “But what about
So-and-so?” is still asked on occasion. But they lie
Frozen and out of touch until an arbitrary chorus
Speaks of a totally different incident with a similar name
In whose tale are hidden syllables
Of what happened so long before that
In some small town, one indifferent summer. 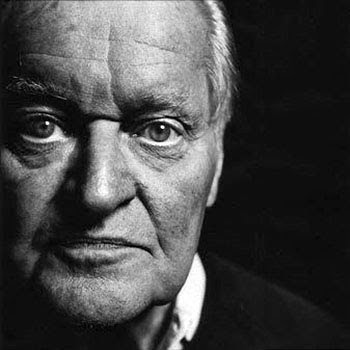 Posted by Anonymous at 9:35 PM