Orpheus and Eurydice by Czesław Miłosz

Standing on flagstones of the sidewalk at the entrance to Hades
Orpheus hunched in a gust of wind
That tore at his coat, rolled past in waves of fog,
Tossed the leaves of the trees. The headlights of cars
Flared and dimmed in each succeeding wave.

He stopped at the glass-paneled door, uncertain
Whether he was strong enough for the ultimate trial.

He remembered her words: “You are a good man.”
He did not quite believe it. Lyric poets
Usually have – he knew it – cold hearts.
It is like a medical condition. Perfection in art
Is given in exchange for such an affliction.

Only her love warmed him, humanized him.
When e was with her, he thought differently about himself.
He could not fail her now, when she was dead.

He pushed open the door and found himself walking in a labyrinth,
Corridors, elevators. The livid light was not light but the dark of the earth.
Electronic dogs passed him noiselessly.
He descended many floors, a hundred, three hundred, down.

He was cold, aware that he was Nowhere.
Under thousands of frozen centuries,
On an ashy trace where generations had moldered,
In a kingdom that seemed to have no bottom and no end.

Thronging shadows surrounded him.
He recognized some of the faces.
He felt the rhythm of his blood.
He felt strongly his life with its guilt
And he was afraid to meet those to whom he had done harm.
But they had lost the ability to remember
And gave him only a glance, indifferent to all that.

For his defense he had a nine-stringed lyre.
He carried in it the music of the earth, against the abyss
That buries all the sounds in silence.
He submitted to the music, yielded
To the dictations of a song, listening with rapt attention,
Became, like his lyre, its instrument.

Thus he arrived at the palace of the rulers of that land.
Persephone, in her garden of withered pear and apple trees,
Black, with naked branches and verrucose twigs,
Listened from the funereal amethyst of her throne.

He sang the brightness of mornings and green rivers,
He sang of smoking water in the rose-colored daybreaks,
Of colors: cinnabar, carmine, burnt sienna, blue,
Of the delight of swimming in the sea under marble cliffs,
Of feasting on a terrace above the tumult of a fishing port,
Of the tastes of wine, olive oil, almonds, mustard, salt.
Of the flight of the swallow, the falcon,
Of a dignified flock of pelicans above a bay,
Of the scent of an armful of lilacs in summer rain,
Of his having composed his words always against death
And of having made no rhyme in praise of nothingness.

I don’t know – said the goddess – whether you loved her or not.
Yet you have come here to rescue her.
She will be returned to you. But there are conditions:
You are not permitted to speak to her, or on the journey back
To turn your head, even once, to assure yourself that she is behind you.

And so Hermes brought forth Eurydice.
Her face no longer hers, utterly gray,
Her eyelids lowered beneath the shade of her lashes.
She stepped rigidly, directed by the hand
Of her guide. Orpheus wanted so much
To call her name, to wake her from that sleep.
But he refrained, for he had accepted the conditions.

And so they set out. He first, and then, not right away,
The slap of the god’s sandals and the light patter
Of her feet fettered by her robe, as if by a shroud.
A steep climbing path phosphorized
Out of darkness like the walls of a tunnel.
He would stop and listen. But then
They stopped, too, and the echo faded.
And when he began to walk the double tapping commenced again.
Sometimes it seemed closer, sometimes more distant.
Under his faith a doubt sprang up
And entwined him like cold bindweed.
Unable to weep, he wept a the loss
Of the human hope for the resurrection of the dead,
Because he was, now, like every other mortal.
His lyre was silent, yet he dreamed, defenseless.
He knew he must have faith and he could not have faith.
And so he would persist for a very long time,
Counting his steps in a half-wakeful torpor.

Day was breaking. Shapes of rock loomed up
Under the luminous eye of the exit from underground.
It happened as he expected. He turned his head
And behind him on the path was no one.

Sun. And sky. And in the sky white clouds.
Only now everything cried to him: Eurydice!
How will I live without you, my consoling one!
But there was a fragrant scent of herbs, the low humming of bees,
And he fell asleep with his cheek on the sun-warmed earth. 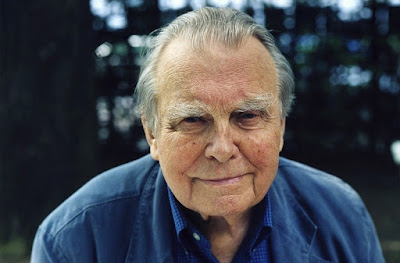 Posted by Anonymous at 8:08 AM