During the Montenegrin Poetry Reading by Tess Gallagher

During the Montenegrin Poetry Reading
Mira, like a white goddess, is translating
so my left ear is a cave near Kotor
where the sea lashes and rakes
the iron darkness inside
the black mountains. Young and old, the poets
are letting us know this sweltering night,
under a bridge near a river outside
Karver Bookstore at the beginning of July,
belongs to them. They clear away debris
about politicians and personal suffering,
these gladiators of desire
and doubt, whose candor has roiled
me like a child shaking stolen beer to foam
the genie of the moment out of
its bottle. The poets’ truth-wrought poems dragging it
out of me, that confession—that I didn’t have children
probably because in some clear corner I knew I would have left them
to join these poets half a world away who, in their language
that is able to break stones, have broken me open
like a melon. Instead of children, I leave my small dog, quivering
as I touched her on the nose, to let her know it’s
me, the one who is always leaving her, yes
I’m going, and for her I have no language with
which to reassure her I’m coming
back, no—what’s the use to pretend I’m
a good mistress to her, she who would never
leave me, she who looks for me everywhere
I am not, until I return. I should feel guilty
but the Montenegrin poets have taken false guilt off
the table. I’ve been swallowed by a cosmic
sneer, with an entire country behind it where
each day it occurs to them how many are still missing
in that recent past of war and havoc. Nothing to do
but shut the gate behind me
and not look back where my scent
even now is fading from the grass. Nostalgia
for myself won’t be tolerated here. I’m just a beast
who, if my dog were a person, would give me a pat
on the head and say something stupid like: Good dog. 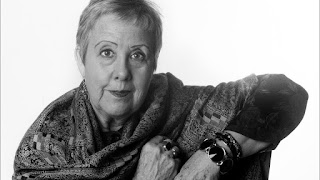