On Beauty by Beth Bachmann

On Beauty
Where there’s blood, there are birds.
After the war, many of the men’s faces are missing parts: an eye, a nose, a mouth.
One doctor uses a man’s own rib to construct a new jaw.
They call him the-man-who-fixes-faces.
A body might stay whole in the trench, but who can resist looking up, sometimes, at the birds?
You get out alive, maybe, but your face wears forever the look of what’s lost.
The-man-who-fixes-faces might give you something like a face.
Now all you see are faces turning away.
A bullet wounds in a straight line, but shrapnel is feathery: it picks up dirt.
The birds, it’s easy to forget, are filthy; a little bird in the blood can kill you.
A square within a circle, the golden ratio, symmetry, they say, makes a face beautiful.
Birds have two eyes, two legs, and two wings, but the soldier’s face is half here, half in the air.
Mirrors can be psychologically damaging to birds.
Birds are territorial.
Birds keep going back to the fountain to check on that one bird beneath the water.
In the park near the hospital, the-man-who-fixes-faces paints some of the benches blue.
The blue benches are for the men whose faces are unrecognizable.
I’ve seen a bird attack a window.
If you don’t want to see a man healing, look up at the sky.
Why is the sky blue?
Symmetry: a line drawn from the sun through the zenith to the “anti-sun.”
Like shrapnel, light scatters. 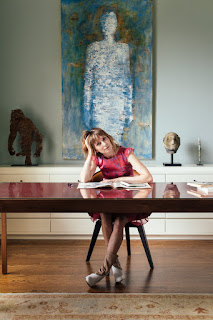