Son in August by Catherine Barnett

Son in August
Dignity, I said to myself
as he carried his last things into the dorm.
It was not a long goodbye,
nothing sad in it,
all I had to do was turn
and head up the hill.
All I had to do was balance
on two feet that seemed to belong
to a marionette who had no idea
what came next or who governed the strings.
There’s no emergency, I told her,
just get back to your car,
that’s it, that’s all that’s required.
I didn’t mind accompanying her,
I myself had nowhere to go.
She drove east then farther east
under a river through a tunnel
until she found herself back at home,
with a purpose.
And the purpose was?
To recognize the green awning.
To find a key in a pocket.
To fit that key in the lock,
take off her shoes, drop them on the floor
with others left there like old coins
from a place she must have visited.
Worth something but what.
There were no clues in the medicine cabinet,
none in the cupboard, none in the freezer
where she found old licorice and Bit-O-Honey
shoved next to a ziplock of bluish breast milk,
all of it frozen solid over nineteen years
into some work of art, a sculpture,
an archaic something of something.
She looked at my hands reaching into the freezer.
Or I looked at hers.
They were strong, worn, spackled with age
as they removed the milk-ice
stashed like weed far in the back.
Do they even make this stuff anymore?
What’s it good for?
What was it ever good for?
Repurposed, she thought,
isn’t that the word the kids keep saying
these days? Hey sweetie,
she called to the unoccupied room,
hey love. It was so hot the air
from the freezer turned to steam
and she took the ice into her own hands,
held it, held it gently against the back
of my warm animal neck
until something began to melt and I was alone. 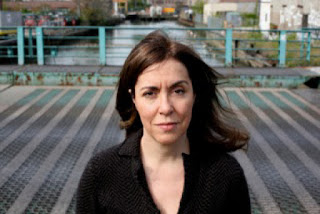