My father stands in the warm evening
on the porch of my first house.
I am four years old and growing tired.
I see his head among the stars,
the glow of his cigarette, redder
than the summer moon riding
low over the old neighborhood. We
are alone, and he asks me if I am happy.
“Are you happy?” I cannot answer.
I do not really understand the word,
and the voice, my father’s voice, is not
his voice, but somehow thick and choked,
a voice I have not heard before, but
heard often since. He bends and passes
a thumb beneath each of my eyes.
The cigarette is gone, but I can smell
the tiredness that hangs on his breath.
He has found nothing, and he smiles
and holds my head with both his hands.
Then he lifts me to his shoulder,
and now I too am among the stars,
as tall as he. Are you happy? I say.
He nods in answer, Yes! oh yes! oh yes!
And in that new voice he says nothing,
holding my head tight against his head,
his eyes closed up against the starlight,
as though those tiny blinking eyes
of light might find a tall, gaunt child
holding his child against the promises
of autumn, until the boy slept
never to waken in that world again. 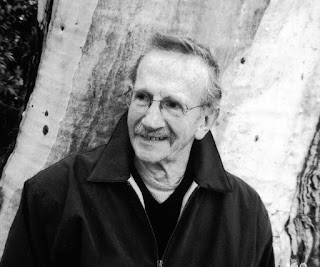