I Won’t Let You Go! by Rabindarath Tagore

The carriage is ready; it’s afternoon;
The late autumnal sun blazes;
A midday breeze swirls dust
Off the deserted rural road;
In the cool shade of a peepal tree
A worn out beggar woman dozes
On a tattered cloth. As in a night
Coming after an excess of sunlight
Everything is still, silent, somnolent—
Only my house is astir,
Its inmates incapable of sleep!

Autumn’s come and gone; holiday’s over,
I leave for my far off workplace.
Our servants run around the house
Packing bags and baggage with ropes and strings,
Although her eyes are full of tears,
And her heart is leaden, my wife
Has not a moment to sit down and cry.
She makes sure that everything is ready
For the journey. My bags are full,
But she thinks I don’t have enough!
I exclaim, “Must I take all?
Boxes, jugs, pots, pans and plates,
Bowls, bottles, and bedclothes too!
What will I do with so many things?
Let me only take some of them
And leave the rest behind.”

But nobody heeds me.
“What if you need this or that?
Where will you get them then?
Here I’ve fine rice, excellent lentils
Betel leaves and areca nuts; in those bowls
Are date-palm molasses and ripe coconuts;
There two jugs of the best mustard oil,
Mango cakes, dried mango sticks and milk,
Here in these bottles, medicines
And in those bowls, delicious sweets—
Promise, dear, you’ll eat them!”
I realize it’s pointless to protest
And let bags and baggage pile up.
I look at my watch and then my dear wife,
And say softly, “Goodbye.”
She glances away, turning her head,
Hiding her face in her sari’s edge,
Fighting tears lest they bring bad luck.

My four-year-old daughter waits outside
Pensively. Any other day,
She would have had a bath by now
And before she had taken a bite or two,
Her eyelids would droop in sleep.
This day her mother has no time for her
And hasn’t noticed that she hasn’t bathed
Or had lunch. All this time she had been
Sticking close to me like my shadow,
Watching my going-away rituals in rapt silence.
Tired now, thinking who knows what,
She stands outside the door silently.
When I say, “Goodbye darling,”
She declares sad-eyed and solemnly,
“I won’t let you go,” staying put,
Making no attempt to take me by the arm
Or blocking my way; as if proclaiming thus
The dictate of her heart. As if only saying
“I won’t let you go” was enough.
And yet the time has come, alas!
She has to let me go!

Silly daughter of mine, was it you speaking?
What gave you the strength
To say so emphatically, “I won’t let you go”?
What made you feel you could stop me
From leaving with only a pair of hands?
How could you think of holding me back
And blocking me with your frail little body
Stirred only by a heart full of love?
Timid and shy as we are, the most we say
Even when our heart bursts with pain is
“Don’t feel like letting you go!”
And to hear your little mouth declare firmly
“I won’t let you go,” to hear you assert
Love’s claim with such intensity!
And yet I feel the world smiling wryly
As it takes me away from my family.
I bid leave, but as in a framed picture,
I register the little one’s image—defeated,
In tears, sitting in the doorway,
And I wipe my tears and leave.

As I depart I see on both sides of the road
Ripening paddy fields basking in the sun.
Towering trees border the highway,
And reflect intently on their own shades.
The autumnal Ganges is in full flow.
White cloudlets recline on a blue sky,
Like newborn calves who’ve had their fill
Of their mother’s milk and sleep peacefully.
I sigh as I look at bright sunlight
Spreading across old, exhausted earth.

Everywhere around me this day I hear
My daughter’s plaintive voice; it keeps ringing
In my ears and piercing the heart of the universe.
Earth resounds with a child’s unreasonable cry.
Forever it loses what it gets and yet it won’t
Slacken its grip; forever it calls us
With unending love like my four-year-old daughter:
“Won’t let you go!” Though sad-faced and in tears,
Its pride shattered at every step,
Love refuses to accept defeat and cries out
In desperation, “Won’t let you go!”
Defeated each time it blurts out,
“Can the one I love stay away?
Can anything in the universe compare
In strength or be as boundless as my desire?”
And even as it proclaims proudly,
“Won’t let you go” the one it treasures
Is blown away instantly, like dust
Wafted by the arid wayward breeze. And then
Tears stream down its eyes. Like a tree
Uprooted, it collapses headfirst, humiliated.
And yet Love insists, “God keeps his Word
I have proof in the pledge He made of a right
Given eternally.” And thus emboldened,
Fragile Love stands up to Death
And boasts, “Death, you don’t exist!”
Death laughs at such folly. And so Love,
Undying, though weighed down by Death,
Pervades the universe, solemn-faced,
Full of fears, forever in a flutter and tears.
A weary hopefulness covers the world
Like a gray fog. I see two inconsolable arms
Vainly trying to bind saddened, silent earth.
Under swift currents a quiet shade—
The allure of a cloud that will soon shed tears.

And thus this day the rustling trees
Induce in me yearnings. In midday heat
The lazy indifferent wind plays listlessly
With dry leaves. The slow day wanes,
Lengthening the shade under the banyan tree.
Eternity’s flute plays a pastoral lament
Heard over the universe. Responding,
Listless Earth sits down in a paddy field
By the river’s side, loosening her tresses,
Flinging a golden scarf across her bosom
That gleams in the golden sun. She is silent,
Her eyes still as she looks at the distant blue sky.
I take a look at her sad, sorrowful face,
As if in a doorway, silent, absorbed, sad.
Just like my four-year-old daughter! 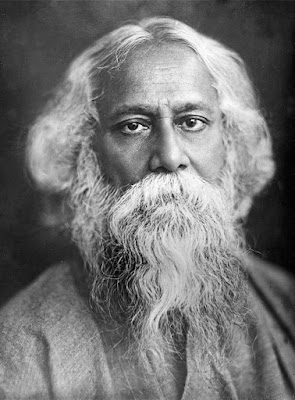 Posted by Anonymous at 1:07 AM