Midnight storm. Trees walking off across the fields in fury
naked in the spark of lightning.
I sit on the white porch on the brown hanging cane chair
coffee in my hand midnight storm midsummer night.
The past, friends and family, drift into the rain shower.
Those relatives in my favourite slides
re-shot from old minute photographs so they now stand
complex ambiguous grainy on my wall.

This is my Uncle who turned up for his marriage
on an elephant. He was a chaplain.
This shy looking man in the light jacket and tie was infamous,
when he went drinking he took the long blonde beautiful hair
of his wife and put one end in the cupboard and locked it
leaving her tethered in an armchair.
He was terrified of her possible adultery
and this way died peaceful happy to the end.
My Grandmother, who went to a dance in a muslin dress
with fireflies captured and embedded in the cloth, shining
and witty. This calm beautiful face
organized wild acts in the tropics.
She hid the milkman in her house
after he had committed murder and at the trial
was thrown out of the court for making jokes at the judge.
Her son became a Q.C.
This is my brother at 6. With his cousin and his sister
and Pam de Voss who fell on a penknife and lost her eye.
My Aunt Christie. She knew Harold Macmillan was a spy
communicating with her through pictures in the newspapers.
Every picture she believed asked her to forgive him,
his hound eyes pleading.

Her husband, Uncle Fitzroy, a doctor in Ceylon,
had a memory sharp as scalpels into his 80’s,
though I never bothered to ask him about anything
- interested then more in the latest recordings of Bobby Darin.

And this is my Mother with her brother Noel in fancy dress.
They are 7 and 8 years old, a hand-coloured photograph,
it is the earliest picture I have. The one I love most.
A picture of my kids at Halloween
has the same contact and laughter.
My Uncle dying at 68, and my Mother a year later dying at 68.
She told me about his death and the day he died
his eyes clearing out of illness as if seeing
right through the room the hospital and she said
he saw something so clear and good his whole body
for a moment became youthful and she remembered
when she sewed badges on his trackshirts.
Her voice joyous in telling me this, her face light and clear.
(My firefly Grandmother also dying at 68).

These are the fragments I have of them, tonight
in this storm, the dogs restless on the porch.
They were all laughing, crazy, and vivid in their prime.
At a party my drunk Father
tried to explain a complex operation on chickens
and managed to kill them all in the process, the guests
having dinner an hour later while my Father slept
and the kids watched the servants clean up the litter
of beaks and feathers on the lawn.

These are their fragments, all I remember,
wanting more knowledge of them. In the mirror and in my kids
I see them in my flesh. Wherever we are
they parade in my brain and the expanding stories
connect to the grey grainy pictures on the wall,
as they hold their drinks or 20 years later
hold grandchildren, pose with favourite dogs,
coming through the light, the electricity, which the storm
destroyed an hour ago, a tree going down by the highway
so that now inside the kids play dominoes by candlelight
and out here the thick rain static the spark of my match
to a cigarette
and the trees across the fields leaving me, distinct
lonely in their own knife scars and cow-chewed bark
frozen in the jagged light as if snapped in their run
the branch arms waving to what was a second ago the dark sky
when in truth like me they haven’t moved.
Haven’t moved an inch from me. 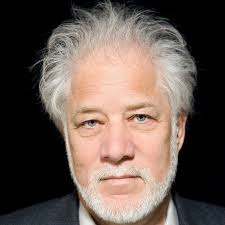