At the conclusion of nine months’
silent communion,
interrupted on occasion
by long one-sided conversations
of a teary and somewhat excessively candid nature,
and after some very loud mutual screaming,
the two were at last introduced. A shadow
as of vast wings passed across them,
in a manner of speaking: he slept, the
small bud of face unclenched. Later on,
still drowsing, he was relatively certain
he had at some point overheard her claim
that while nursing he never stopped staring
into her eyes, which was fair enough; but
when she added that she felt like she was being judged,
right away he sensed things getting out of hand.
That night he lay awake pondering
the matter for many hours, compelled at last
to find her accusation jejune, massively
unsubstantiated, unwitnessed by anyone
but the accuser, pathetically, and tinged with paranoia—
not a trait, incidentally, you are happy to see
in the person with whom you’ll be sharing the next couple decades.
I have done no such thing, he concluded.
In addition, while she remained perfectly free
to fall in line with the mores and laws handed down
by the sheep who exist, his own adamant intent was
to go on waiting for word from his god, who did not.
And, he muttered irritably, “I want a harmonica.” 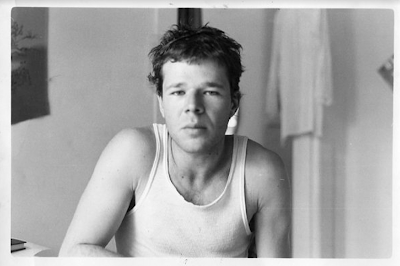 Posted by Anonymous at 9:53 PM