Given to Rust by Vievee Francis

Given to Rust
Every time I open my mouth my teeth reveal
more than I mean to. I can’t stop tonguing them, my teeth.
Almost giddy to know they’re still there (my mother lost hers)
but I am embarrassed nonetheless that even they aren’t
pretty. Still, I did once like my voice, the way it moved
through the gap in my teeth like birdsong in the morning,
like the slow swirl of a creek at dusk. Just yesterday
a woman closed her eyes as I read aloud, and
said she wanted to sleep in the sound of it, my voice.
I can still sing some. Early cancer didn’t stop the compulsion
to sing but
there’s gravel now. An undercurrent
that also reveals me. Time and disaster. A heavy landslide
down the mountain. When you stopped speaking to me
what you really wanted was for me to stop speaking to you. To
stifle the sound of my voice. I know.
Didn’t want the quicksilver of it in your ear.
What does it mean
to silence another? It means I ruminate on the hit
of rain against the tin roof of childhood, how I could listen
all day until the water rusted its way in. And there I was
putting a pan over here and a pot over there to catch it. 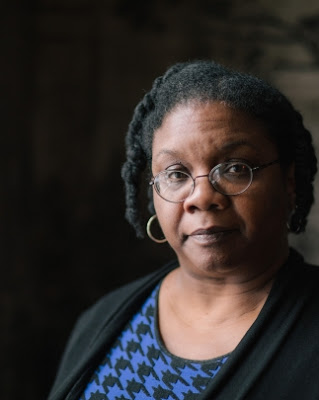