Prayer for the Man Who Mugged My Father, 72 by Charles Harper Webb

Prayer for the Man Who Mugged My Father, 72
May there be an afterlife.
May you meet him there, the same age as you.
May the meeting take place in a small, locked room.
May the bushes where you hid be there again, leaves tipped with razor-
blades and acid.
May the rifle butt you bashed him with be in his hands.
May the glass in his car window, which you smashed as he sat stopped
at a red light, spike the rifle butt, and the concrete on which you’ll
fall.
May the needles the doctors used to close his eye, stab your pupils
every time you hit the wall and then the floor, which will be often.
May my father let you cower for a while, whimpering, "Please don't
shoot me. Please."
May he laugh, unload your gun, toss it away;
Then may he take you with bare hands.
May those hands, which taught his son to throw a curve and drive a nail
and hold a frog, feel like cannonballs against your jaw.
May his arms, which powered handstands and made their muscles jump
to please me, wrap your head and grind your face like stone.
May his chest, thick and hairy as a bear's, feel like a bear's snapping
your bones.
May his feet, which showed me the flutter kick and carried me miles
through the woods, feel like axes crushing your one claim to man-
hood as he chops you down.
And when you are down, and he's done with you, which will be soon,
since, even one-eyed, with brain damage, he's a merciful man,
May the door to the room open and let him stride away to the Valhalla
he deserves.
May you—bleeding, broken—drag yourself upright.
May you think the worst is over;
You've survived, and may still win.
Then may the door open once more, and let me in. 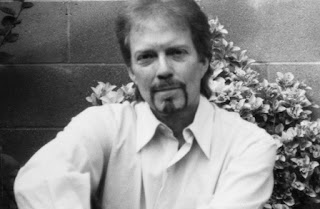